In a troubling story by the Associated Press‘ Kathy Gannon, we get a closer look at the motives and aftermath of an “honor killing.” It involves a Pakistani man, Mubeen Rajhu, who murdered his Muslim sister after she began dating a Christian man (who allegedly converted to Islam, not that it mattered). 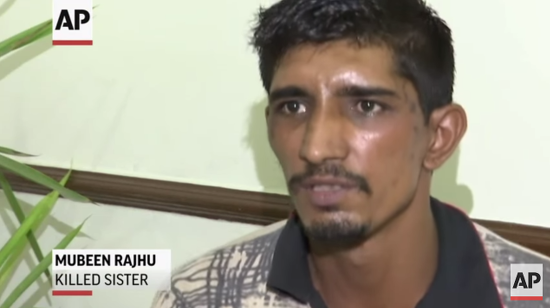 The murderers, in these cases, are usually close to the victims — family members, co-workers, neighbors — and they’re all complicit in furthering the spread of this despicable practice. Just look at what Rajhu’s father had to say about the death of his daughter:

[His father] is angry that his son killed his sister for two reasons only: the young man is in jail and no longer earning nearly $200 a month, and his family, spread throughout Pakistan, will soon learn of Tasleem’s indiscretions.

He’s blaming her for destroying the family. His son murdered her and it’s her fault. It’s the worst kind of victim-blaming you’ll ever see.

We don’t get any explanation for why Rahju did this. And why would we? There is no reason for it. Only rationalizations that make absolutely no sense.

His justifications suggest a mix of barbaric culture and toxic dogma that requires purity and subservience from women at all costs. If a woman — and it’s almost always a woman — dares to challenge that status quo, even her murder at the hands of a sibling can be warranted.

October 3, 2016
High-Profile Atheist Explains Why He's on the Trump Train: An Interview with Robert M. Price
Next Post

October 3, 2016 Letting Pastors Promote Political Candidates in Church Would Inevitably Backfire
Browse Our Archives
What Are Your Thoughts?leave a comment