Duck Dynasty‘s Phil Robertson has a new documentary opening later this week all about what happens to societies when God leaves the picture. It’s called Torchbearer and it’s produced by Citizens United (yes, that one).

In Robertson’s mind, when we don’t take God seriously, it can only lead to death and devastation: 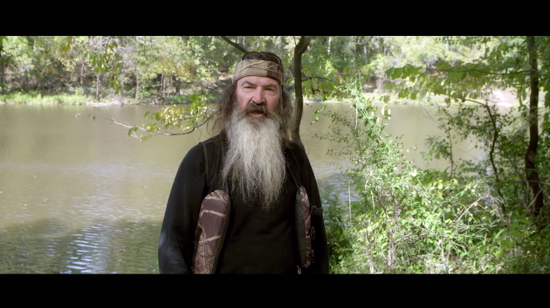 “When you remove God, and allow humans to determine right, wrong, good, evil, and what one’s life is worth; you leave that up to human beings, and you have the Romans, the Greeks, you have Adolf Hitler, Hirohito, Josef Stalin, and this latest crop that’s come our way, the Islamists,” Robertson told TheDC.

Because the problem with Islamic extremism is that there’s not enough God. They need more religion!

(While we’re at it, someone please ask him what religion Hitler was.)

Robertson actually acknowledges that Islamists believe in God, but adds that they believe in the wrong God. So it’s not for societies to promote religion; they have to promote the Christian God… or else.

That premise is just wrong. We know what societies without God look like and they’re usually incredible. Sociologist Phil Zuckerman has explained this at length:

As Zuckerman writes, there are exceptions to the good-without-God nations, but they’re often guilty of pushing a different sort of dogmatism. Nations without real freedom of conscience are no better than ones that push a specific faith on citizens.

Just to play Robertson’s game, though, is the United States heading down a similar path of doom?

“In America, we’ve certainly run God out of the entertainment business for the most part, I know we’ve run him out of the institutions of higher learning, no doubt about that. A fifth grader can’t offer a prayer before she eats a meal,” Robertson said. “So basically we’ve got God run out of including our government, by the way. So we’ve legislated the murder of our children, we’ve made it legal. We legislated perversion, we made that legal.”

Christ, that’s a lot of bullshit in one passage.

All fifth graders can pray before a meal. Even in public school. Church/state separation groups openly defend that right. Robertson is either lying or ignorant.

If God’s out of the government, someone tell me why there’s not a single open atheist in Congress, or why the government employs a Christian chaplain, or why we have to keep battling religious demagogues who use their platforms to promote their Christian faith.

He unfairly equates aborting a fetus with the murder of children, unaware of any medical or moral difference. If he really wanted to prevent the murder of children, he’d look into gun safety measures since those are a leading cause of children’s death. Instead, he proudly carries a gun on the movie’s poster as if easy access to lethal weapons is never part of the problem.

And legislating “perversion” is just conservative Christianese for demonizing gays and lesbians in love. Guess what? Marriage equality has been the law of the land for more than a year now — even longer in several states — and the sky hasn’t fallen yet.

I asked Zuckerman what he made of Robertson’s comments and he said this via email:

Robertson’s claim is not new. It’s as old as the Bible.

Religious fundamentalists always say that if we turn from God, the results will be societal chaos and human distraction. This is however, actually a sociological claim. We can measure it. You’ve got an independent variable: faith in God. And a dependent variable: societal well-being.

All we have to do is go out and look at the world. This is what we see: first, most societies that have undergone secularization over the last century have become more democratic and more safe, not less. So, for example, life was much worse in Holland 150 years ago for your average person than it is today. Democracy is stronger, crime is down, human rights are up, and all the while religion has faded dramatically.

Just compare rates of violence and murder in the Czech Republic, which has some of the highest levels of atheism, to the Philippines which has some of the highest rates of theism. What you will see, is that murder rates are down in the Czech Republic and democracy is strong, while the Philippines is doing much worse on both fronts.

So the claim that turning away from God leads to evil is simply not substantiated.

This whole movie appears to be based on a faulty premise and perpetuates the same idiotic Christian claims that Robertson has peddled for years. He sees any criticism of his beliefs as an attack on his faith — which must be why his views never change no matter how silly and illogical they are.

Ray Comfort will change more minds with his latest movie than Robertson ever will. That’s not saying much.

October 3, 2016
Millions of Women in Poland Are On Strike Today to Protest Draconian Anti-Abortion Legislation
Next Post