At an event this morning for the Retired American Warriors PAC, Donald Trump brought up the story of Bremerton High School assistant football coach Joe Kennedy, who was fired from his position after he refused to stop praying on the field while on the clock. This came after Kennedy had already been caught leading prayers with team members, a constitutional no-no. (Kennedy is currently suing the Bremerton School District.)

Guess what? Kennedy was in the audience. (Whether that was planned or not is unclear, but it’d be one hell of a strange coincidence if it wasn’t.) 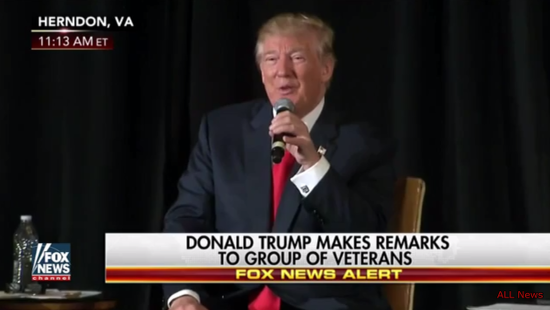 “So you’re not allowed to pray before a football game?” Trump asked, adding, “I thought it was horrible.”

“They put me on suspension and then at the end of the year they gave me an adverse write-up of how well I did my job. I didn’t change anything for eight years,” Kennedy told Trump in front of the other retired service members. “Always prayed after every game. And they just really slapped me on it. Said what a horrible person I was. Ended up just not renewing my contract, so ultimately firing me.”

The fact that Trump expressed sympathy for a public school official who attempted to proselytize while on the job is just another indication that he would be a disaster for anyone who respects church/state separation. What happened to Kennedy was “outrageous” to Trump only because he wants to preside over a country where Christians would get special rights that other groups — Muslims, Satanists, Pagans, etc. — would never receive.

What Kennedy did would never have been tolerated if he wasn’t a Christian, and that’s why it shouldn’t be tolerated now. If he’s upset, it’s because he’s finally being treated like everyone else.

Trump should have recognized that Kennedy, not the school district, was breaking the law, and that the firing was justified.

But Trump lives in a conservative Christian bubble right now. To his advisors, Kennedy is a martyr for the cause. No wonder Trump sympathized with him.

October 3, 2016 Please Support the Work I Do Through This Site
Browse Our Archives
What Are Your Thoughts?leave a comment