Earlier today, someone leaked a series of videos documenting never-before-made-public conversations among the Quorum of the Twelve Apostles (the second-highest governing body in the Mormon Church). The discussions took place between 2008 and 2011.

The videos uploaded by Mormon Leaks (who is not the person who leaked additional internal documents a couple of weeks ago) show the leaders discussing how everything from marijuana policy to marriage statistics to the 2008 elections could affect the Mormon Church. 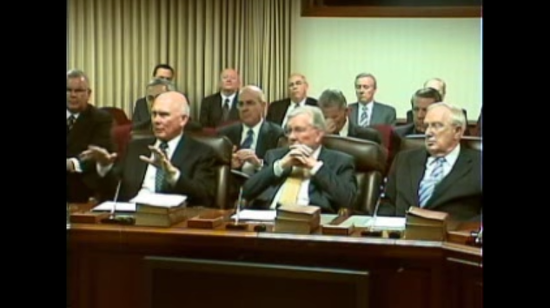 So what do we learn? In short, these leaders live in a complete bubble, see every controversy or tragedy as a new opportunity to win converts, and have a relationship with sitting U.S. politicians that is far too cozy for comfort.

While more revelations may come out soon, here’s a brief look at just two of the videos.

One of them is all about the WikiLeaks scandal and Chelsea Manning and how the Mormons must prevent security breaches in the Church. Which is extremely ironic given what just happened today…

After the presentation is over, the only questions from the Quorum seem to be about the sexual orientations of Manning and Julian Assange. Like Elder Dallin Oaks‘s statement about Manning:

… I’m suspicious that the news media cover up anything involving homosexuals when it would work to the disadvantage of the homosexual agenda.

In another video with then-U.S. Senator Gordon Smith (R-OR), who is a Mormon himself, the politician shares a number of jaw-dropping statements with the Quorum.

And it begins with an introduction in which Smith’s staff is described as “Church broke” — like a housebroken dog. The person introducing the senator adds that Smith’s legislative director recently called him on the phone to ask, “What are we supposed to be doing?” as if they take direct instruction from Church leaders instead of their constituents.

Then Smith begins to speak:

… I know and have been a critic of the Iraq War, but I also admit to you I voted for it because I felt the Lord’s hand in it. I hope it works out, but I can promise you this: you’ll never send missionaries to the Arab street until the rule of law exists in Arabia, and it has taken root in Iraq. And ultimately, I think that if that succeeds, there will be an opportunity to begin building the Church in the Middle East, which is a deeply troubled place.

… You will never please [the homosexual community]. You can’t win the argument with them, because, ultimately, what they want is the secular sanctification of their relationships in law. The problem with that is that marriage is an ideal… that teaches the public that there is an enduring value to the foundational organization of a mother and a father and a boy and a girl and a dog and a cat and a house. When we mix that up and confuse that message, societies that I have observed, particularly in Europe who change this law, they fundamentally change the incentives and relationship to marrying and building a home. So while I have made friends among the gay and lesbian community, they turned from me when I voted to make it a Constitutional amendment to define marriage as one man and one woman.

He added that the Mormon Church was right to take a strong stance against marriage equality in the Proposition 8 controversy.

Probably, by this year, Iran may well have… enough fissile material to create a nuclear bomb. They have in their battles plans — and some of this may be classified. Maybe the 2009 data is classified still — but they have the rocketry to hit Israel…

Some of this may be classified? Then why the hell is he sharing it with Church leaders?!

The truth is: The Catholics and the evangelicals are allies, but to a point… [Catholic leaders] preach to a congregation that doesn’t believe what they teach on abortion or on the sanctity of the family. Among the evangelicals that you deal with… many, and maybe most, that I have worked with run businesses as described in the Book of Mormon that are “priestcraft.” These are cults of personality that are in the business of religion… Use them as you can… you don’t need to be as out front as you were in California [with Prop 8].

These videos offer a very disturbing look at how sheltered and out of touch these leaders are — as well as how much political influence they wield. And I doubt these are the last revelations we’ll see.

October 2, 2016
As a Girl, She Didn't Experience the Paranormal; The Same Reasoning Helped Her Leave Christianity
Next Post