As any regular reader of this site knows, I don’t post much about ancient history. That’s partly because it doesn’t always affect the issues I write about, and partly because I fall asleep about two words into any lecture or discussion about it.

But Dr. Richard Carrier loves this stuff and he’s written a book called Science Education in the Early Roman Empire (Pitchstone Publishing, 2016). So if the intersection of those two worlds excites you, well, this one’s for you. 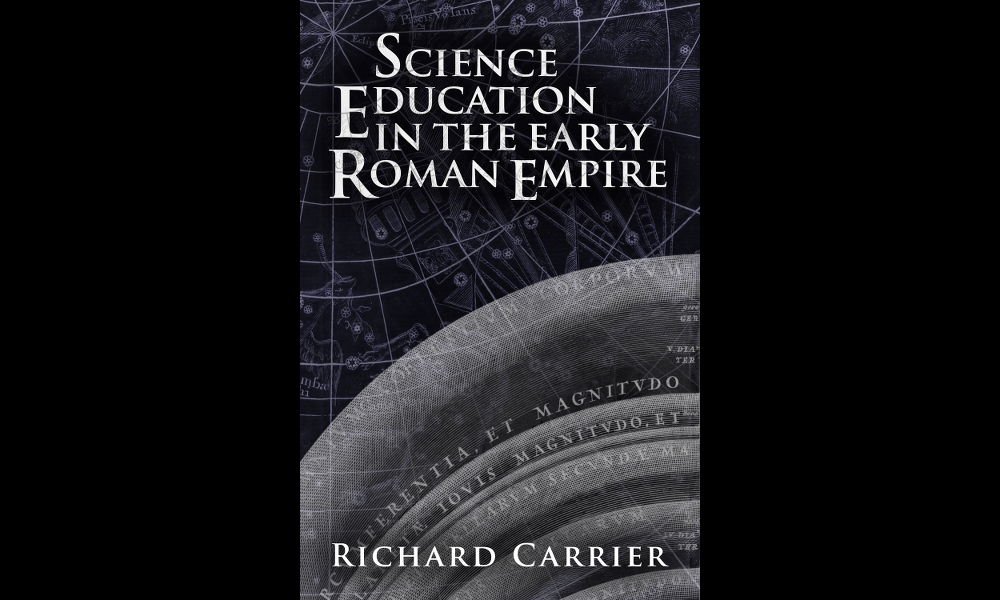 In the excerpt below, Carrier introduces the topic to his readers:

In preparation for my forthcoming book The Scientist in the Early Roman Empire it became necessary to fill a gap in the literature on ancient education. Past treatments of that subject have glossed over the question of science education specifically, at most providing a few cursory paragraphs of largely superficial analysis, sometimes even confessing it to be inadequate. Accordingly I had to provide a thorough analysis of the evidence on my own for my Columbia University dissertation, and the resulting chapter there is here expanded as an independent monograph. The present book provides a generalized survey of the entire ancient education system as it was in the early Roman Empire, wherein the significance of science in its curriculum is emphasized. And by “science” in this context I mean knowledge of the natural world, actively pursued by empirical means, with an ongoing concern for developing and employing valid methods of drawing conclusions from observations.

The thesis I shall explore in my next book on the subject of ancient science is whether ancient scientists (then known as “natural philosophers”) were marginalized or perceived with indifference by the educated or empowered elite. Many historians have claimed they were, and then argue that this attitude explains the failure of the ancients to realize the great Scientific Revolution hailed in modern times. Both claims are dubious. Even more dubious is the claim that the seminal change responsible was the introduction of Christian values in the education system, paving the way for the ensuing revolution. Nevertheless, in pursuit of all three claims, an important indication of social attitudes toward the natural philosopher is that science and natural philosophy were not considered very important in early Roman education. Other achievements were regarded as far more valuable, particularly the ability to speak well in public and in court, and to write with an impressive literary style. As we shall see, these were almost the exclusive aims of all Roman education except at the highest levels of instruction, and even then only a select few pursued studies that involved a broader acquaintance with science and natural philosophy. This does not entail any actual hostility toward natural philosophers and their work, but it does imply a certain level of indifference toward them, since literary and verbal achievements were more valued.

These conclusions can be misleading, however. Any comparison with modern education, for example, is not entirely apt. Science has gradually become a required and more widely pursued subject of modern education at all levels, but in most respects this is a product of the Scientific Revolution and its subsequently observed benefits, which obviously had not transpired in the ancient world. In a sense the elevation of science in modern education reflects the same values that motivated the ancients: then as now, the education most widely embraced in a society emphasizes the learning that is most likely to produce a good living or maintain an elevated social status, since it is by mastering certain subjects that one can enter a good career or avoid derision as an unlearned ‘hick’. In antiquity the subjects that could gain these ends were literature and eloquence, not science or mathematics, or even a merely practical literacy, unlike today. This does mean the ancient social system rewarded classical literacy and eloquence far more than science or mathematics, almost the exact reverse of the situation now, but this does not entail that science and mathematics had negative or no value, any more than erudition or eloquence have negative or no value today.

Any attempt to attribute the ‘lack’ of a scientific revolution in antiquity to an apparent absence of value for science in the prevalent educational system must find a more relevant comparison. And for that, historians of the Scientific Revolution need to know how widely scientific subjects were actually taught in primary and secondary education before the 17th century. Studies of medieval university curricula do not apply to that question, since few among the population of the time would ever have advanced so far, if they received any education at all. So if medieval primary and secondary education did not significantly differ in subject material from their ancient counterparts, or in the numbers thus educated, the question then becomes whether and to what extent late medieval higher education differed from ancient higher education in these respects. And it is not likely to come out well by comparison. The actual science content of medieval universities was very limited and circumscribed, consisting almost entirely of a limited survey of Aristotle (already scientifically obsolete even in the early Roman era) and (for medical students) Hippocrates and Galen, and the methods taught were predominantly not empirical. In any school there was typically only one mathematics professor (who was not even an engineer and rarely even a productive astronomer) for every dozen or so professors of medicine (none of whom taught any hands-on dissection, apothecary, or experimental methods). Improvements in these respects only began in the 16th century, and thus again were more a product than a cause of a then-ongoing Scientific Revolution. In fact, universities did not conduct or promote new research, and to the end of the 17th century no actual scientific discovery was ever made in a university. What we take for granted now in educational aims and standards is in fact largely a product of the mid-20th century, when the nuclear and space programs launched science and engineering as pervasive nationalist concerns. And though in America a slow and limited development toward increasing science content in primary and secondary schools had begun in the late 18th century, that’s again well after the Scientific Revolution — and even then it was only in the later 19th century that any science content could be called typical in American schools. Indeed, even in England, often credited with driving the Scientific Revolution as we know it, as late as the dawn of WWII “the British government and educational systems treated applied mathematics and statistics as largely irrelevant to practical problems. Well-to-do boys in English boarding schools learned Greek and Latin but not science and engineering, which were associated with low-class trades,” which description would just as well fit schools in the United States before the American Revolution. It’s unlikely we’ll find it to have been much different in the Middle Ages. Or after. A rising craze for mathematics in the 16th and 17th centuries is often noted, for example, but standing back and looking at European society as a whole, this appears only to have occurred in rarified circles, just as in antiquity. The only difference is that far more sources have survived from the later period, creating only an illusion of more interest and activity.

Though a more focused analysis of the actual facts of medieval education must be left to another study, the other half of this comparison shall be provided here: what was the Roman educational system really like in these regards? We will then compare pagan and Christian educational ideals, to see if any stark differences remain, because any subsequent change in Christian values (such as during the Middle Ages) cannot be attributed to Christianity in any original sense. In fact such values may represent only a recovery of what had already been pagan values before Christianity monopolized Western culture.

Science Education in the Early Roman Empire is now available on Amazon.

October 1, 2016
Does Your Social Security Number Include the Digits 666? You Can Legally Change it
Next Post