A Christian rapper from Maryland has been found guilty of murder after running over his producer with his car.

A judge in Montgomery County, Maryland, found Ryan Anthony Salandy (a.k.a. Ry Money) guilty of murder in the second degree (with grievous bodily harm) nearly a year after the Christian performer was first indicted. Salandy, who sings about spirituality and miracles, faces up to 30 years in prison. 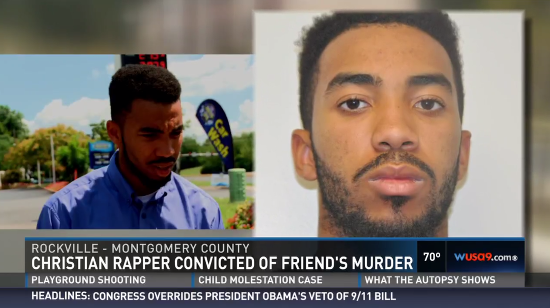 Salandy is just the most recent in string of Christian performers who have been convicted for crimes that directly conflict with their religion’s commandment not to murder. Tim Lambesis, the lead singer and co-founder of Christian heavy metal band As I Lay Dying, was arrested in 2013 for soliciting an undercover detective to kill his wife. He pled guilty a year later.

Authorities charged Salandy, then 22, with first-degree murder in September 2015. They identified the victim as William Dean McDaniel and said he was killed following a dispute with Salandy the day before.

Prosecutors later alleged that Salandy, who had no previous criminal record, killed McDaniel over a business deal involving the production of his Christian rap music. They had a verbal disagreement over the CDs, leading to the fatal hit-and-run event.

When I asked for a statement, a representative for the prosecution said running someone over is “not the way to resolve a dispute.” The argument over CDs could have been resolved by a civil court, according to Ramon Korionoff, public affairs director for the Montgomery County State’s Attorney’s Office.

What should have been solved in a civil court ended up in a death prosecuted in criminal court. This is the ultimate cautionary tale of anger and pride taking hold of a young man who should’ve turned to the values he espoused in his music instead of the violence and allure of the streets which proved to be the exact opposite of the message of the genre of music in which both men were involved.

Salandy’s conviction, like Lambesis’ in 2014, once again shows that religious adherence is not equivalent to moral superiority. You can promote Christianity (or any other religion) all day long, but at the end of the day it won’t keep you from doing “evil” things.

Ancient doctrines might have been helpful for keeping our ancestors in line, but being ethical takes more than faith. It takes self-control and, more importantly, a conscience.