Female Chess Players Will Have to Wear Hijabs to Compete in Next Year’s World Championships September 30, 2016 Hemant Mehta

Apparently, even at a tournament for the best female chess players in the world, they’ll be forced to cover up their heads to follow the dictates of Islamic extremism. That’s because FIDE’s Commission for Women’s Chess chose Iran to be the host nation for next year’s world championships. 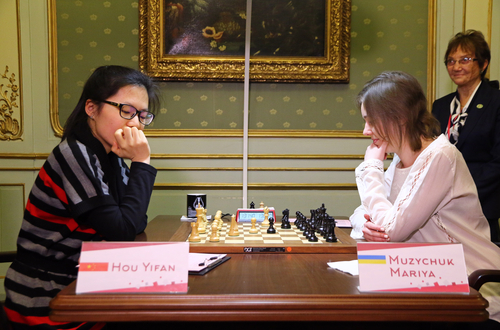 Grandmasters have accused FIDE of disregarding sexual discrimination by selecting a place that would require the competitors to wear hijabs. Meanwhile, FIDE’s Commission for Women’s Chess has urged participants to accept the hijab regulations in respect of “cultural differences.”

Not all cultural differences deserve respect, though. It’s not a mere difference when failure to wear a hijab could lead to imprisonment.

Nazi Paikidze, the U.S. champion, says she won’t participate in the event, essentially flipping her chess board and saying, “No one tells me what to wear, especially not at an event where I’m supposed to be judged for my mind.”

Former Pan American champion Carla Heredia, from Ecuador, added: “No institution, no government, nor a Women’s World Chess Championship should force women to wear or to take out a hijab.

“This violates all what sports means. Sport should be free of discrimination by sex, religion and sexual orientation.

“The obligation to use hijab is one issue, another one is that women can’t share room with a male if she is not married to him.

It was wrong to choose Iran as a venue for this competition, forcing players to follow Islamic law to compete, just as it would be wrong to tell a Muslim player she couldn’t wear a hijab. It’s sad that a chess tournament is getting derailed because of a clothing issue, but on the world’s stage, it’s more important than ever to stand up for human rights instead of caving in to an oppressive regime.

And by the way, if any of those chess players are openly atheist — and critical of Islam — the penalty could be death.

(Image via katatonia82 / Shutterstock.com. Thanks to @StutzBob for the link)

September 30, 2016 Alabama Chief Justice Roy Moore Suspended for Remainder of Term (But He'll Keep His Job)
Browse Our Archives
What Are Your Thoughts?leave a comment