A week ago, 19-year-old Braxton Taylor, who was gay, died of suicide. (Those facts have not been confirmed by independent sources.)

But things took a strange turn when a woman posted his obituary on Facebook. Independent Utah State Senate candidate Jason Christensen chimed in with a disturbing faith-based comment: 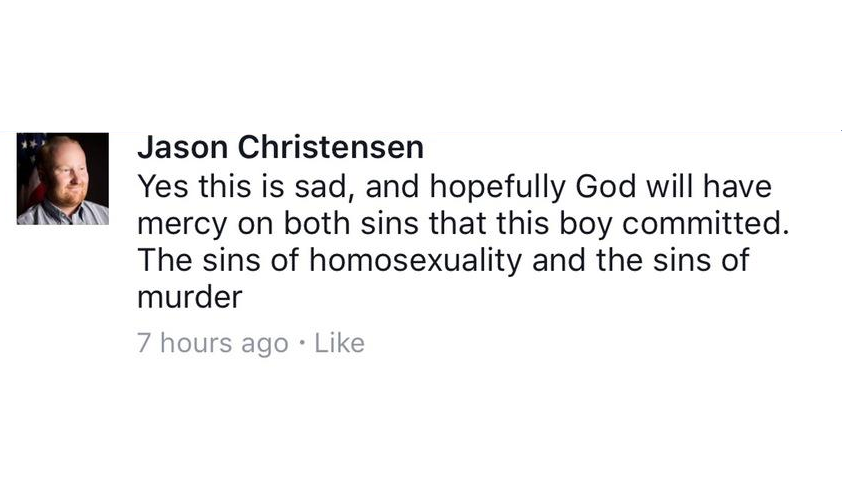 Yes this is sad, and hopefully God will have mercy on both sins that this boy committed. The sins of homosexuality and the sins of murder

That’s how he responded to the death of a young man?! With condemnation and evangelism?

Homosexuality, of course, isn’t a problem unless your God gets in the way. And it’s insensitive, if not downright cruel, to equate suicide with murder.

After other commenters expressed shock at his awful comment, Christensen posted on his personal page: “Don’t you love how intolerant the left actually is?” That post was later deleted.

Christensen’s website, however, hasn’t changed. It still refers to homosexuality as an idea promoted by people with an “evil communistic agenda.” In other words, this wasn’t a hoax. This guy actually believes this nonsense.

If there’s any silver lining to be found here, it’s that, in 2014, when Christensen ran for the Utah State House, he lost with a mere 11% of the vote. Let’s hope the same fate befalls him this time around.

September 30, 2016
God Is Definitely Not a Feminist
Next Post