Many Evangelical Christians Feel Out of Place in Society (But You Shouldn’t Feel Bad About It) September 29, 2016 Hemant Mehta

In a New York Times article about evangelical Christians who feel left out in modern society — with LGBT people inching closer to equal rights and a Republican candidate who doesn’t really seem to care about preventing it — reporter Laurie Goodstein profiles people you will have absolutely no sympathy for. 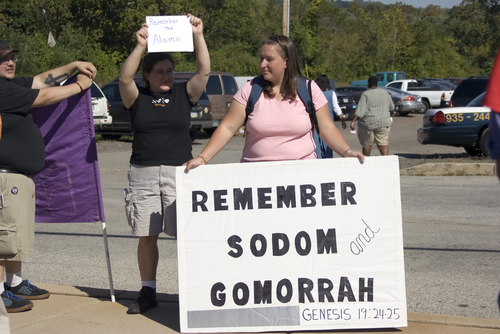 Betty and Dick Odgaard aren’t bad people, they’ll tell you. They just want to deny gay couples who want to get married access to a building they own. Is that so wrong?

… three years ago, the Odgaards refused to rent the quaint site to two gay men for a wedding, saying it would violate their religious beliefs about marriage. The men filed a civil rights complaint, and the Odgaards settled, paying a penalty because it is illegal to discriminate on the basis of sexual orientation. After the controversy, regular customers stopped coming. Friends and family members stopped speaking to them. The Odgaards were vilified as bigots and haters.

Overnight, it seemed, they discovered that even in small-town Iowa they were outnumbered, isolated and unpopular. Everyone they knew seemed to have a gay relative or friend. Mr. Odgaard’s daughter from his first marriage disavowed her father’s actions on Facebook, and his gay second cousin will not speak to him…

What’s the number for the waaaaaambulance…?

The Odgaards were vilified as bigots and haters because they are bigots and haters. Just because they discriminate against certain people in the name of Christ doesn’t make it okay. We would never accept it if they didn’t rent their facility to black people and it’s unacceptable that they don’t rent it out to gay people.

And don’t make the mistake of thinking this is just karma or a reverse form of oppression. They spent a lifetime actively oppressing LGBT people and now, at worst, people are holding them accountable for it. Even in their worst moments, no one’s saying they can’t buy a goddamn cake at a bakery.

In another case, an evangelical was keenly aware of how silly her beliefs sounded to people outside her bubble:

“I’m worried for America if we don’t turn away from abortion,” said Mrs. [Melissa] Berkheimer, who is 48. “I think our country is going to be punished, with a nuclear weapon. I don’t think you can mock God forever.”

She quickly added that she was worried she would sound crazy saying such things.

If the shoe fits…

The simple fact remains that progressives are trying to build a nation where religious bigotry in public spaces is not tolerated. LGBT people should be able to purchase goods without a problem. Women should be able to obtain abortions without faith-based restrictions getting in their way. Science education shouldn’t be ruined by the intrusion of Christian mythology. Comprehensive sex education shouldn’t be tossed out of public schools because evangelicals are too afraid to talk about the subject honestly and openly.

If they feel like people hold their views in contempt, it’s because we’ve seen the harm they cause. We’ve seen the hypocrisy. We’ve seen how little of it is based on evidence and reason, and we’re tired of being held back by people who live in an alternative universe where Jesus talks to them on a daily basis and promises to whisk them away during their lifetimes.

They’re welcome to their beliefs. No one’s stopping them from going to church or painting targets on the backs of non-Christians. But they need to deal with the consequences when those beliefs are finally challenged.

They’re only upset because, for too long, everyone treated faith as a virtue. In a country where piety was currency, they were wealthy. It’s about damn time that market crashed.

September 29, 2016
In Singapore, Teen Atheist Given (Another) Jail Sentence for “Wounding Religious Feelings” Online
Next Post

September 29, 2016 Bill Donohue: Blasphemy Rights Day is Anti-Catholic (and Richard Dawkins is Like a KKK Wizard)
Browse Our Archives
What Are Your Thoughts?leave a comment