Last Night’s Black-ish Focused on Atheism (and the Pushback Against It) in the Black Community September 29, 2016 Hemant Mehta

Last night’s episode of Black-ish featured a welcome discussion about atheism in the black community.

When daughter Zoey (Yara Shahidi) announces that she may not believe in God, her father Dre (Anthony Anderson) has no clue how to deal with it. He thinks he’s a bad father. Zoey’s grandmother tries to save her soul. Dre also turns the situation into a racial issue when he finds out that a lot of his white colleagues at work are also atheists. 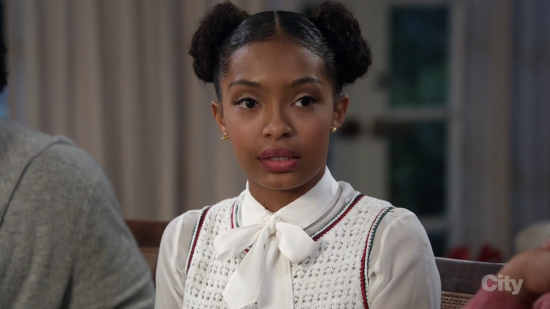 In one scene, Dre and his wife Bow (Tracee Ellis Ross) talk about what they might have done wrong:

DRE: … I’m just worried that she won’t have anything to turn to when she finds herself alone in that foxhole.

BOW: Dre, I want Zoey to have a connection, too, but you can’t bully God into her! She’s gotta get there on her own!

DRE: What if she doesn’t?

BOW: Well, then, we just have to have faith that we raised a strong and good person who can handle whatever life throws at her.

Vulture‘s Nichole Perkins does an excellent job of summarizing the episode’s meaning:

… Dre points out that many black people who experienced slavery or the intense racism and poverty of the south turned to Christianity because they needed to believe life would get better. They needed faith in a better future, whether on Earth or after death. However, a significant number of black people reject outright all types of religion, and that subject doesn’t get explored nearly as often on mainstream television. Props to Black-ish for tackling it in a thoughtful and humorous way, and without a prescriptive lesson.

It’s wonderful to see atheism in the black community treated with this sort of respect and nuance — especially with such a likable character in Zoey.

Last year, we saw something similar on The Carmichael Show when the main character’s girlfriend announced her agnosticism to the family. Then, too, the topic was handled with care by the writers.

As I wrote then, this issue can go horribly wrong. A few years ago, a show called Belle’s featured an atheist character treated like poison by his girlfriend and her father. That episode had no redemptive ending.

If all this helps normalize atheism and pushes more families to have these discussions in their own home, what a tremendous gift these shows are providing.

September 29, 2016
Donald Trump "Jokes" About Kicking Non-Christians Out of His Rally
Next Post