Donald Trump “Jokes” About Kicking Non-Christians Out of His Rally September 29, 2016 Hemant Mehta

Donald Trump “Jokes” About Kicking Non-Christians Out of His Rally

Speaking in Council Bluffs, Iowa yesterday, Donald Trump pandered to the overwhelmingly Christian audience in a frightening way: by joking that everyone else should be kicked out. 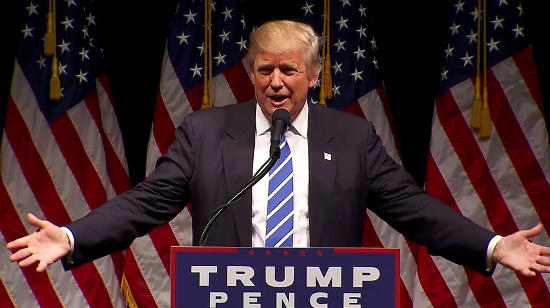 … Raise your hand, Christian conservatives, everybody.

Raise your hand if you’re not a Christian conservative. I want to see this, right.

Should we keep them in the room? Yes? I think so.

Besides the idiotic move of asking people in the minority to make themselves known to everyone else — should we put a mark on their doors next? — the very last line there doesn’t negate the ones that came before.

Should we keep them in the room?

What if the crowd screamed “No”?

Why is Trump asking a question for which there’s only one acceptable answer?

What the hell is he even suggesting?

I’ve seen politicians pander to a Christian audience, but I can’t recall a presidential candidate doing it by basically saying, “Fuck everyone else, AM I RIGHT?!”

If Trump was joking, and I’m sure he thought he was, it’s telling that the butts of his “joke” were people who didn’t fit his ideal mold. This time, it was non-Christians. Monday night, it was a woman deemed too heavy for his tastes. Before that, it was Muslim parents who dared to challenge him. The man doesn’t know how to punch in any direction but down.

If that’s the man evangelicals want to support, shame on them. If Donald Trump loses the election, we might be able to ignore his insults. But don’t forget the conservative Christians who are enabling him. Not voting for Trump is a one-day affair. Change isn’t going to happen, though, until young Christians walk out of those megachurches and find a new way to worship.