Fresh off of his primary loss in Colorado, current State Rep. Gordon Klingenschmitt appeared on his Pray In Jesus Name show to say that Hillary Clinton hates Christians and is possessed by the devil.

All because she said Donald Trump‘s “racist, sexist, homophobic, xenophobic, Islamophobic” supporters were part of a “basket of deplorables.” 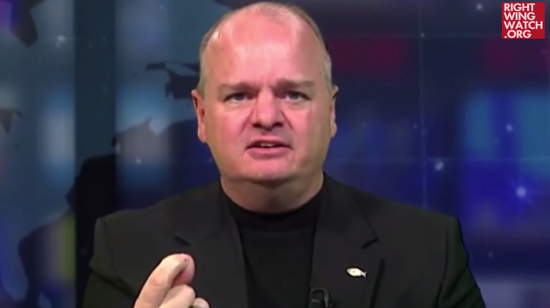 “She’s talking about you, the viewer of this program,” Klingenschmitt declared. “If you believe the Bible, Hillary deplores you! Now, those are just the facts; let’s discern the spirits, let’s take a moment and say what is it inside of Hillary that makes her deplore us? She’s labeling an entire category of people as we’re deplorable, does that mean she deplores us? Does that say something about what’s inside of her, not what’s inside of us?”

Clinton, who is Christian, doesn’t hate Christians. She opposes anyone who harbors “racist, sexist, homophobic, xenophobic, Islamophobic” thoughts no matter who they are or what they believe about God. That’s it.

What’s really interesting is that Clinton also said the other half of Trump’s supporters were people who were just “desperate for change.” Klingenschmitt could have put himself in that category. He didn’t. He heard all those descriptions in the first group and immediately raised his hand, claiming that he and his followers belonged in that group. Telling, isn’t it?

At the end of the clip, you see him praying to God to save Clinton “from this demonic spirit of hatred,” even though she’s hardly the spiteful one in this election. But if last night’s debate is any indication, it’s clear that even the Devil says “I’m with her.”