According to the “Declaration of Dependence upon God and His Holy Bible,” a group of Religious Right leaders want Christians to promise that they won’t obey the law if it means indirectly supporting abortion rights or marriage equality.

Evangelical Pastor Andrew Wommack has already spent more than half a million dollars circulating the Declaration, including in the Sunday New York Times (which, let’s face it, was a complete waste of money). 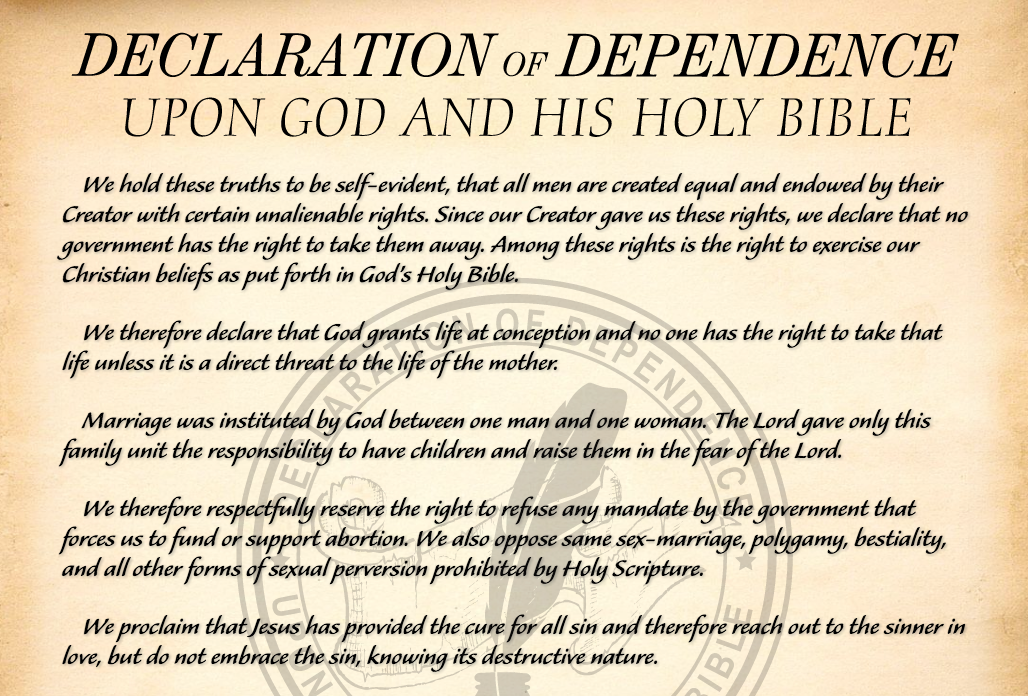 We therefore respectfully reserve the right to refuse any mandate by the government that forces us to fund or support abortion. We also oppose same-sex marriage, polygamy, bestiality, and all other forms of sexual perversion prohibited by Holy Scripture.

Therefore, we, the undersigned — not only as Christians but also believing we have the constitutional rights as Americans to follow these time honored Christian beliefs — commit to conducting our churches, ministries, businesses, and personal lives in accordance with our Christian faith and choose to obey God rather than man.

The Declaration doesn’t say it directly, but you could interpret it as saying Christians shouldn’t pay taxes if any of that money goes to Planned Parenthood (despite the Hyde Amendment).

As usual, the Christians equate gay marriage with polygamy and bestiality, once again revealing their ignorance on those topics.

The biggest problem, though, is the part that says even their businesses fall under these rules, as if Christian bakers and florists should be allowed to discriminate against LGBT customers.

Keep in mind that atheists already pay taxes that support the White House Office of Faith-Based and Neighborhood Partnerships, which gives money to religious organizations, some of which openly discriminate in their hiring. We can debate whether that should be allowed, but I’ve never heard atheist groups suggest we stop paying taxes until that happens.

If everyone who opposed certain kinds of government spending stopped paying taxes, it would grind the country to a halt. Let’s file a lawsuit if something is illegal. Let’s raise a fuss if we feel discrimination is underfoot. But threatening to not pay taxes because you have a problem with women controlling their bodies is petty, vindictive, and selfish.

The good news here is that Christian Right leaders have tried this gambit before, in 2009. It didn’t get them anywhere. They whined. They raised money off of their whining. Nothing happened. And then they tried it again. It’s a schtick they’ve perfected in their churches, so it’s hardly surprising they’re trying it with politics.

September 27, 2016
Here's a Reminder of What the Law Says About Tomorrow's "See You at the Pole" Event
Next Post