The Freedom From Religion Foundation recently stopped a hotel affiliated with Arizona State University from putting Bibles in the rooms — for obvious reasons. It’s not a private hotel, and a taxpayer-funded school shouldn’t be giving away Christian propaganda. 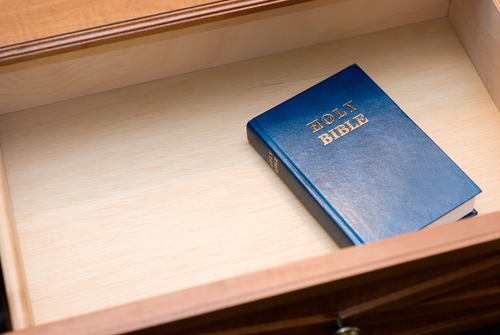 Linda Valdez, writing for the Arizona Republic, can’t believe it. She thinks FFRF is abusing the separation of church and state by, you know, defending it.

… going after Bibles in hotel room drawers? Give me a break.

Those Bibles sit quietly in the dark unless someone opens the drawer. They go quietly back into the dark if that someone is not interested.

Going after those Bibles as though they represent a major threat is like smothering a lamb with legal briefs. It’s overkill, folks. And it is a strategic mistake.

Bibles in hotel-room drawers are not in the same category as posting the Ten Commandments at the courthouse door or declaring this a Christian nation or requiring public school children to recite prayers to a Christian God.

1) If those were Qur’ans tucked away in the drawers instead of Bibles, Christians would not just sit idly by and say, “I’m glad they’re there for anyone who needs them.” They would go after the promotion of Islam by the public university. That’s why FFRF is doing the same thing about the Bible. Christians don’t deserve this privilege that they’ve grown accustomed to.

2) Valdez says the hotel room Bibles aren’t big deals, but Ten Commandments monuments on public property are. But has she ever thought about why those monuments are still up outside some courthouses (and public schools)? It’s because they became tradition. They snuck in decades ago and are now coasting by on their longevity.

FFRF rightly takes the position that any violation of church/state separation must be challenged. Because if they aren’t, Christians will only get more egregious the next time around.

In this case, if they can get away with Bibles in hotel rooms, why not put Bibles in dorm rooms at the start of the school year? Why not give them to students during orientation? Where should the line be drawn?

The better solution is for the hotel to make Bibles available to any guests who request them, but not to keep them in rooms as the default option.

FFRF has it right. They’re not letting the school get away with this even if it may seem petty to some. The last thing they need is for schools to realize no one will come after them for promoting Christianity in their buildings.