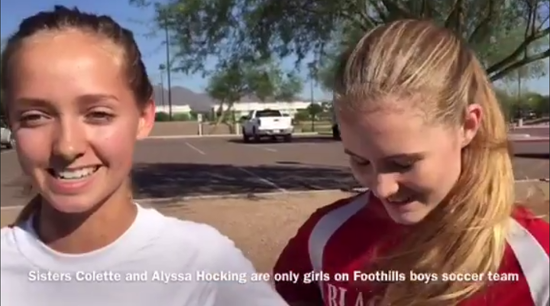 The boys at Faith Christian School in Arizona took the well-deserved loss against Foothills Academy College Prep. What’s even more incredible is that the Christian school’s administrator basically blames the other side for messing with God’s plan.

“I know it appears to fly in the face of what everyone is wanting to promote today, and that is equality,” said Dick Buckingham, administrative leader of Faith Christian. “It is based on a religious perspective that God created guys and girls differently. The difference physically, there is a strength advantage that men have over women. We want to teach our men that honor of ladies is just not in sports. We struggle how to teach that if we’re allowing them to play against young ladies in a competitive game.

“We’re the ones harmed because we’re giving up a game. We think it’s better to do that than give a mixed message.”

“There is a strength advantage that men have over women,” said the head of the school that couldn’t handle playing two strong women.

Kudos to the girls’ teammates, too. They refused to put up with the faith-based sexism.

The players voted not to play unless midfielders Alyssa and Colette Hocking were allowed to play.

“Actually, it was the team’s decision,” Foothills coach Steven Rains said. “They would not play without their team. They felt the girls earned the right to be on the team. And they won’t play without them.“

Earlier last week, when faced with a similar situation against Our Lady of Sorrows school, the girls didn’t play at their mother’s request. She didn’t want to ruin the boys’ fun if there was a religious issue with their opponents. But when it happened a second time, the boys on the team refused to let the girls sit out. (Our Lady of Sorrows actually forfeited a state championship game in 2012 instead of playing a team that had a girl on it. Must be something in the baptismal pool water.)

A similar situation also occurred last year between a Catholic school (with girls on the soccer team) and a Muslim school (that didn’t want to play them). At least that story had a better ending.

Any serious sports coach knows you have to find your opponents’ weaknesses and exploit them. If you’re in the same league as Faith Christian, I don’t see why your team wouldn’t make sure there’s a girl on the roster, qualified or not, just to see what they’ll do. It’s the Christians who need to get over their baseless sexism, not the boys teams that allow girls to join. At Foothills, in case you’re wondering, there isn’t a girls soccer program. That’s why Alyssa and Colette Hocking are on the boys team. (Also, they’re just really damn good.)

If your religion says you can’t compete against another team because of who their players are, the problem isn’t their team. It’s your religion.

September 27, 2016 Here's a Reminder of What the Law Says About Tomorrow's "See You at the Pole" Event
Browse Our Archives
What Are Your Thoughts?leave a comment