Pope Francis — Mr. Who-Am-I-To-Judge — made clear where he stands on marriage equality over the weekend. Turns out the Pope is still Catholic. 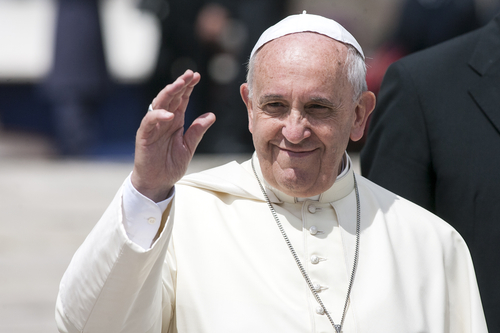 An estimated 215,000 people demonstrated against the government’s proposal to legalize same-sex marriage over the weekend, and the Pope supported the Church’s stance backing the protesters.

After having remained quiet while Italy debated civil unions for same-sex couples in May, on Sunday Pope Francis expressed support for the Mexican bishops in their efforts to support the “family and life” amid a burgeoning national debate over gay marriage.

“I join willingly the Bishops of Mexico in supporting the efforts of the Church and civil society in favor of the family and of life, which at this time require special pastoral and cultural attention worldwide,” Francis said after the weekly Angelus prayer.

This isn’t surprising at all. the only reason it’s worth mentioning is because there are plenty of people who think Pope Francis is a liberal dream, someone willing to go against the worst practices of the Catholic Church. He’s not. He’s one of them. He’s is just as much of a bigot as his predecessors. The only difference is that he smiles.

Saying you love gay people while backing anti-gay protesters in Mexico is the equivalent of evangelicals saying that meaningless phrase, “love the sinner, hate the sin.”

It is not “loving” to deny people the ability to marry — and the legal perks that come with it — just because they fell in love with someone of the same sex.

This Pope agrees with Church doctrine that “homosexual acts are intrinsically disordered” and all gay people must choose a life of celibacy. He’s no friend to the LGBT community.

Someone should tell The Advocate.

(via Joe. My. God.. Image via giulio napolitano / Shutterstock.com)

September 26, 2016 Guam Law Ending Statute of Limitations on Sex Abuse Cases Could Force Church Into Bankruptcy
Browse Our Archives
What Are Your Thoughts?leave a comment