We know there’s a problem with prosperity gospel preachers who get rich off of their church members. It’s appalling when some of them, like Pastor Creflo Dollar, ask their congregations for money to buy something as extravagant as a $65 million private jet.

But it’s especially disturbing when those pastors live in communities that are deeply impoverished. They’re not just taking money from their followers; they’re building their empires on the backs of those who have so little to give.

That’s what a group called New Era Detroit was protesting last week. They showed up at Great Faith Ministries International, run by Bishop Wayne T. Jackson, to make their case. A brawl ensued, which got a lot of media attention, but the purpose of the protest was the bigger story, according to “Zeek,” NED’s organizer. 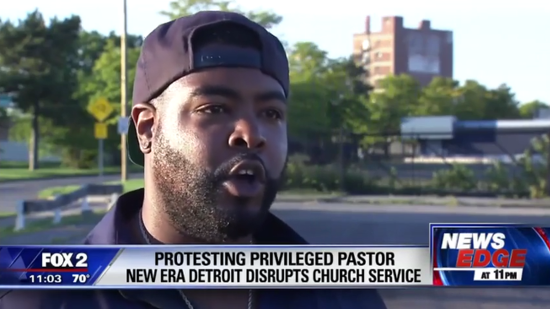 “The situation is bigger than just Wayne T. Jackson,” Zeek said. “This is about black churches and black pastors who live a lavish life on behalf of the people and they are not giving back to their community.”

He’s referring to Bishop Wayne T. Jackson, the wealthy pastor that welcomed Donald Trump, drives a Rolls Royce and lives in a mansion.

Zeek was there for the offering Saturday.

“This guy has networks, churches, fancy cars, million dollar houses,” Zeek said. “And there’s babies in this community that doesn’t have food at night. Somebody has to be frustrated about this enough to do something that will get people’s attention and that’s what New Era Detroit did.”

Jackson’s parishioners defended him (of course), saying he’s helped them through difficult times. But that’s hardly surprising. Jackson has to throw them a bone every once in a while or they won’t keep giving him money.

Do any of those followers know the church’s budget? Where their money goes? What percentage is spent on the pastor’s lavish lifestyle versus how much is used for charity and the church’s mission work? I doubt it.

NED is raising some fair questions: What obligation does a church have to serve its community, and is it really helping when the pastor is getting wealthy from their contributions? In a troubled city like Detroit, these believers may be satisfying their emotional needs by ignoring the fact that their bank accounts are getting lighter.

September 26, 2016
Some Latinos, Fearing a Donald Trump Presidency, Are Turning to Psychics for Comfort
Next Post