In his latest video picking apart the messages coming out of this summer’s Jehovah’s Witnesses regional conferences, Lloyd Evans explains and analyzes the threats of bad associations by preemptively shunning them. That also means obeying JW rules no matter what, even if your life is on the line. 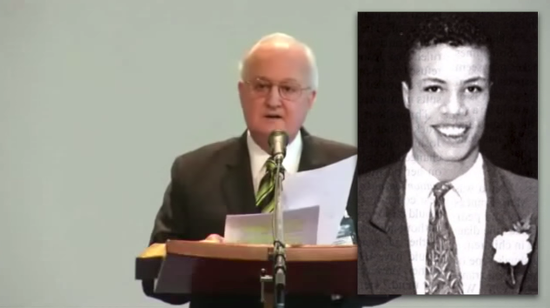 Lloyd summarized the most devastating part of the video in an email to me. It involves the story of Joshua, a young man who refused a blood transfusion that would have saved his life because he thought Jehovah wouldn’t approve of it.

Perhaps nothing highlights the moral depravity of Witness theology like the manipulation of the children of JWs to die refusing blood in observance of their parents’ beliefs. Well, watch the end of the Part 7 video, and you will see a JW Governing Body member — his voice shaking — relating just such a story from the 1990s involving a 15-year-old boy called Joshua.

The fact that he could be so obviously emotionally disturbed by what he is reading, and yet still point to the story as a laudable example of faith, tells you everything you need to know about what it means to be in a cult. Cult mind control can make you support an atrocity that you are distraught about while simultaneously having the power to put a stop to it — at least for others. This, in essence, is cognitive dissonance — the agonising balancing of two conflicting sets of ideas — and it is raging in the minds of cult victims AND cult leaders all over the world, from Mormonism to Scientology, from the Westboro Baptist Church to the Exclusive Brethren, from Jehovah’s Witnesses to ISIS.

Time and again we see evidence that the human mind is programmable by external influence. If you can control the flow of information — say, by making someone sit through a three-day convention about remaining loyal to a group of men even to the point of death — you can control a person. It’s a shocking fact of life, but the sooner we come to terms with this sinister, grotesque underbelly of religion, the sooner we can do something about it.

These videos are seriously disturbing. What’s appalling is how many people believe they represent the best way to go through life.

This is part 7 of Evans’ recaps of these conference videos.

Part 4 was about Ethan, a man whose life is hit with disaster after disaster as he clings to his JW religion. It also included another propaganda film.

Part 5 was about remaining silent, even if you had grievances against the elders, and making sure you never get a blood transfusion, even if it will save your life.

Part 6 was about not attending parties thrown by non-Witnesses, denying evolution, praising a woman who shunned her mother, and recruiting converts by toying with their emotions.

September 26, 2016
Why Do Climate Change Deniers Reject Sound Science? A New Paper Has Some Theories
Next Post