If you were to walk through O’Donnell High School in Texas as recently as last month, you would have seen this giant mural of the Ten Commandments. 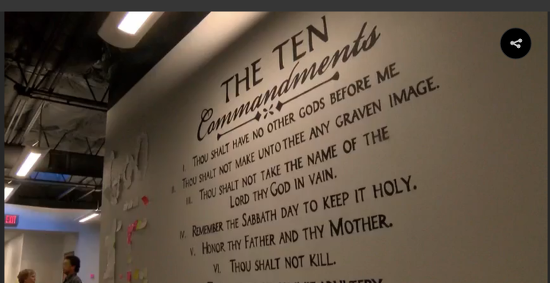 In the same area, there’s also a mention of Isaiah 40:31, which talks about what will happen to those “who hope in the Lord.”

It led the Freedom From Religion Foundation’s Sam Grover to send a letter to O’Donnell ISD Superintendent Dr. Cathy Amonett. He called out the illegal promotion of Christianity and gave the District a choice: Remove the mural or face a lawsuit.

Until that decision could be made, Amonett had an American flag placed over the Christian list. It’s a move that infuriated some students, who clearly haven’t been paying any attention in their government classes.

“I made the decision to cover it up until I made a more informed decision about what I should do, because I don’t want to harm the district or cause any controversy or anything,” Dr. Amonett said.

But the students have taken that frustration and turned it into a movement.

“Students have put verses on sticky notes just around the hallways and stuff. So two verses and commandments they’ve been complaining about turned into 70 verses,” junior Sebastian Pedroza said.

That’s… perfectly fine. FFRF doesn’t care what students do on their own. Their letter and request wasn’t an anti-Christian move; it was about making sure the District was following the law.

Students still protested, something they would never do it verses from the Qur’an were painted on the walls instead. The entire mural sent a clear message to students: If you’re not Christian, you’re not welcome here.

It took a few weeks, but Amonett finally made the right decision. She announced yesterday that the entire mural would be painted over:

“After consultation with legal counsel, community members and students, I have decided as the Superintendent of O’Donnell ISD that the Ten Commandment mural will no longer be on display beginning Sept. 16, 2016. Although the District’s students and community members strongly support the preservation of the mural as it is, I have decided that its continued display in the commons area of the school is not in the District’s best legal interests.”

“I am so very proud of the students at O’Donnell ISD for taking a stand for what they believe in and for demonstrating extremely mature conduct in the expression of those beliefs. They have shown themselves to the world to be strong, intelligent and passionate students who deserve to be respected. The current state of American constitutional jurisprudence, however, does not permit the District to continue its display of the mural,” wrote Dr. Amonett in a press release.

That’s all right. Amonett doesn’t want to upset the locals, and that’s a smart way to do it: I wish we could keep the painting, but the law says we can’t!

At the end of the day, FFRF was right, the students were wrong, and the school is no longer violating the law. Maybe the teachers there can turn this into a lesson so that the teenagers understand why they were on the wrong side of this decision.

(Screenshot via KCBD. Thanks to Brian for the link)