56-year-old Nahed Hattar, a Jordanian writer and Christian-turned-atheist, was assassinated in the capital city of Amman this morning, apparently in response to posting this cartoon (or a version of it) on his Facebook wall — a cartoon he later deleted and apologized for. It shows a man in paradise, in bed with two women, treating God as a servant. 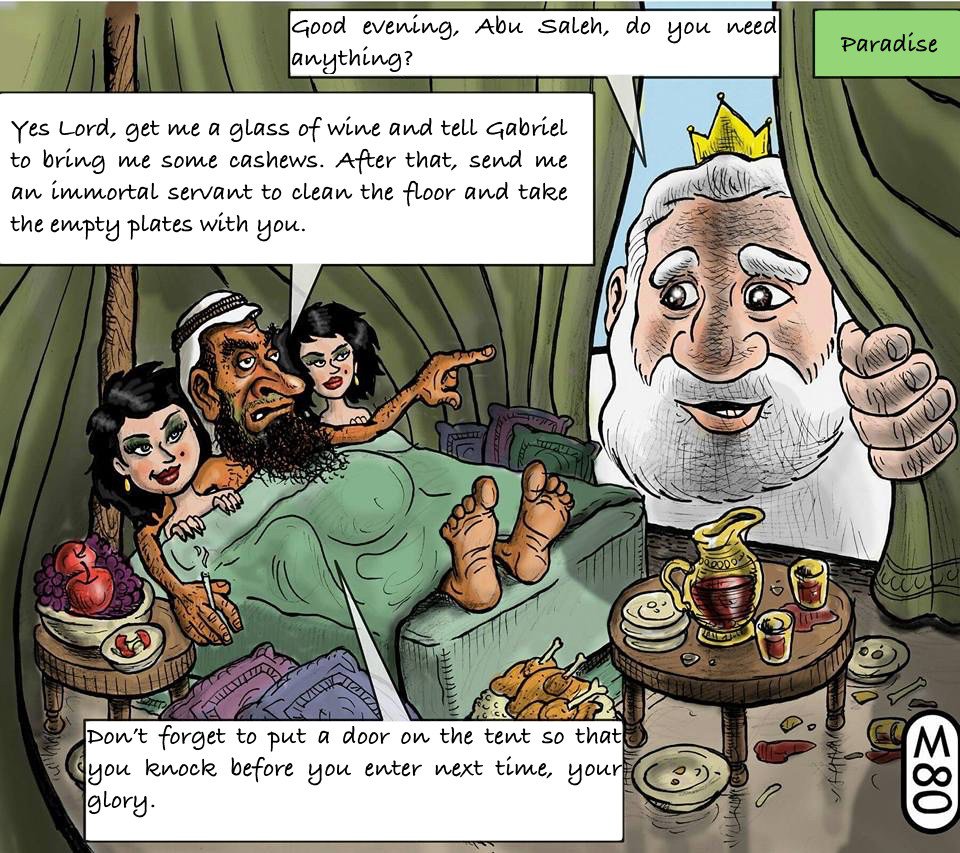 He was heading to the Supreme Court for a preliminary hearing on charges of offending Islam (over the same cartoon) when he was killed by a man since identified as Riad Abdullah, a local imam.

His post was widely denounced on social media, and he removed it shortly after. He deactivated his Facebook account and released an apology that said he “did not mean to offend anyone.” The apology, using another name for the Islamic State, also said the cartoon “mocks ISIS terrorists and their concept of heaven.” He was released on bail earlier this month.

That apology also pointed out that the image “mocks terrorists and their concept of God and heaven. It does not infringe God’s divinity in any way.”

If the purpose of the cartoon was to show just how demented the beliefs of Islamic terrorists were… well, they proved his point, didn’t they? It’s not just the warped idea of martyrdom leading to glory in the afterlife, it’s the belief that any criticism of their beliefs is a crime worthy of death.

A government spokesman, Mohammad Momani, said in a statement on Sunday, “We will hold the perpetrator who committed this despicable act to justice, and the government will respond with an iron fist to anyone who uses this incident as an opportunity to spread hate speech in society.”

That sounds like the proper response, but it’s also incredibly hypocritical. Jordan, after all, is a country where insulting Islam is considered a crime. How can you say you want to stop “hate speech” when your government can’t even handle free speech?

Just as we saw with the Charlie Hebdo massacre in France, there are people out there who claim to follow a religion of peace, yet who use violence in response to anyone who challenges them. There needs to be universal condemnation of the murderers along with universal support for the cartoonists killed for criticizing dogmatic beliefs. You don’t have to like the cartoons or agree with them, but if you can’t support their freedom to draw (or simply spread) those images without the threat of punishment, you’re part of the problem.

Speaking of which, major news outlets reporting this story refuse to post the cartoon itself, just adding to this despicable idea that some beliefs cannot be mocked, even in the reporting of a story about murder. This isn’t gratuitous. This is newsworthy. They’re contributing to the harmful ideology that says some ideas are immune from criticism.

September 25, 2016 Sean Carroll Quickly Summarizes the Power of Science and the Biggest Flaw with Religion
Browse Our Archives
What Are Your Thoughts?leave a comment