I’ve heard a lot of conservatives complain that we no longer allow forced Christian prayers in public schools, but until now, I’ve never heard that described as “racist.”

But “institutionalized racism” is how Rep. Dave Brat (R-VA) described a lack of government-mandated religious education in our schools. 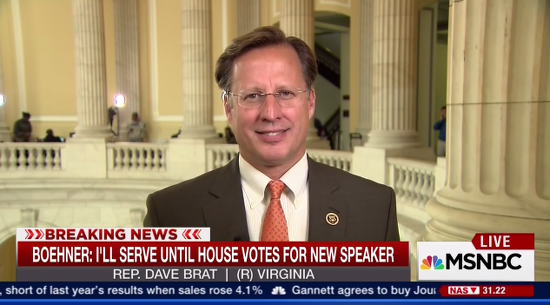 “The Democrat policy in education is holding back an entire generation from being successful,” he said, “and then you end up with this racial system when your school system … [is] teaching them about isosceles triangles but we’re not giving them any hope.”

“There is institutional racism,” Brat told [talk radio host John] Fredericks, “and if Obama and Hillary want to talk about institutionalized racism, I just mentioned the source of it. It’s their own policies. that’s where the institutional racism is, right? When you don’t tell people what is ethically good and bad, right, if you cannot even define what a morally good life is anymore and you block the Bible and you block the Judeo-Christian tradition and you block the Baptist church, which is fundamental in the African-American community, from being the voice of power and the only hope you give is a broken federal system of government …”

Needless to say, Democrats haven’t taken the Bible or prayer out of school. The only thing that’s gone are mandatory Bible readings — and those readings hardly taught students the difference between right and wrong, good and bad.

Separation of church and state isn’t racist. Not privileging Christianity isn’t racist, either. And Brat is sorely mistaken if he thinks racism didn’t exist when Bible readings were mandatory.

September 24, 2016 Pickens County (SC) School Board Will Allow Member-Led Christian Prayers at Meetings
Browse Our Archives
What Are Your Thoughts?leave a comment