If you were a high school history teacher trying to enlighten students to the power of the First Amendment — what it allows you to do and what it doesn’t — in the wake of the National Anthem protests spurred by Colin Kaepernick, how would you do it?

And then, to demonstrate that point, he desecrated a flag. Specifically, he stepped on it three times — or “stomped” on it, depending on who you ask.

One student took a picture after the fact: 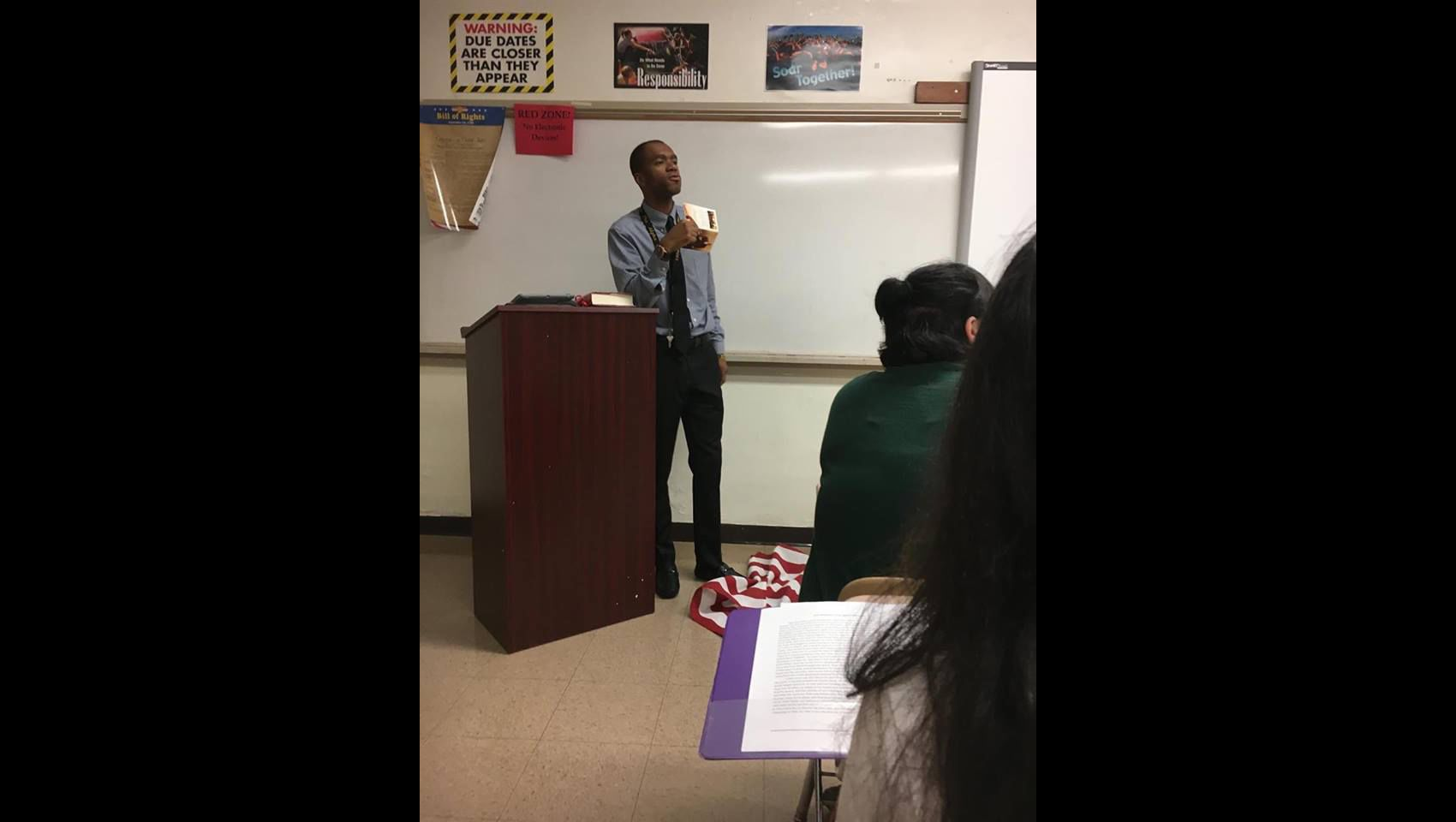 According to one report, Francis also asked students for scissors or a lighter, though he made clear he was just joking. Students aren’t supposed to have lighters in the classroom, after all.

Two students who clearly didn’t understand the point of the lesson walked out of class after it was over, taking the crumpled flag with them to the principal’s office so it could be properly disposed of.

Francis didn’t mind that reaction at all:

“… this is exactly what I teach: You don’t teach kids how to think or what to think; you teach them to go their own path,” he said. “If they feel so convicted that this is their cause they’re going to stand for, I don’t blame them. It’s an upper-level school for those who aspire to go to college and in that regard, we have rigor and expectations, so I treat them as such.”

He’s absolutely right. What he did was purposely provocative, but that’s exactly the point. He has the right to desecrate a symbol — certainly to turn his back on it — without getting into any legal trouble. (The fact that it was the school’s flag and not his own is a separate but minor issue.)

The ACLU agrees with that point:

“One of the reasons our country is great is that the Constitution gives people the right to free speech and expression, no matter how much others may disagree or be uncomfortable with the message,” Mike Meno, an ACLU spokesman said. “And that is certainly a lesson worth teaching. The very freedoms and principles that the American flag represents include the freedom to stomp on the flag.”

Too bad it didn’t matter to administrators who acted quickly to punish Francis. He was on paid administrative leave this past week and was suspended yesterday for 10 days without pay.

How’s that for a lesson, kids? The First Amendment only protects popular speech! A teacher who makes you feel uncomfortable in class will be punished for it! What horrible takeaways.

Show me someone offended by what Francis did, and I’ll show you someone who doesn’t give a damn about the First Amendment.

Like North Carolina State Rep. John Szoka, who sent this letter to the superintendent earlier this week:

“You need to investigate this immediately and if Mr. Francis did in fact trample the flag as has been reported, then he should be prosecuted for his misconduct under State law and I believe he should be fired for his actions,” Szoka wrote. “I ask that you take action immediately.”

Ignore the First Amendment! said the guy who took an oath promising to uphold the Constitution…

The fact is that many children of our brave fighting men and women attend that school and they deserve better.

I was especially moved by the patriotism of the teenagers in that classroom. Ms. [Sara] Taylor wrote on her post that one of the students took the flag out of the classroom and asked that it be properly take care of.

What sanctimonious bullshit. Starnes gets more offended by tarnished symbols than the fact that we’re fighting unnecessary wars. You could use a flag as a bandage around a soldier’s wound, and Starnes would call you unpatriotic.

In a public statement yesterday, Superintendent Dr. Frank Till quoted former Supreme Court Justice Oliver Wendell Holmes Jr.: “Freedom of speech does not allow you to yell ‘fire’ in a crowded theater.” He was saying Francis didn’t break any laws, but that didn’t make his action okay.

It’s an absurd comparison. yelling “fire” in a crowded theater threatens public safety. Stepping on a flag makes students think. There’s a difference, and Till is a coward for caving to public pressure and not recognizing that distinction.

I’ll grant him this: The First Amendment doesn’t mean you get to do whatever you want when you’re working at a teacher. You can’t, for example, spend a class period swearing at the students. But what Francis did here wasn’t gratuitous or mean. He was making a point… and it worked.

A few years ago, there was a similar story of a college professor who asked students to step on a piece of paper with the word “Jesus” on it. Most of them, the lesson plan predicted, would hesitate or refuse. That’s because the symbolic nature of the paper was so powerful. But one student misinterpreted the lesson as an attack on his faith and the professor was later punished for it. For doing his job.

This is an issue atheists ought to care about because many of us fight against symbols all the time. We’re told to say the Pledge of Allegiance, and some of us remain seated when that happens because we don’t want to pledge to a nation “under God” or one that falsely states we have “justice for all.” We’re told to salute the flag, to honor a country where African Americans live in fear of getting shot even if they did nothing wrong, where Hispanic Americans may see hard-working family members deported, where LGBT people have to fight for basic rights, and I understand why they may not want to pretend like the U.S. is the greatest country in the world.

We hold a position on religion that is tremendously unpopular. The very act of starting a club for atheists or wearing a shirt that says you’re an atheist could turn you into a pariah. We know what it’s like when you don’t go along with the majority, when you make people question their values, when you dare to push others to think critically. That’s what Francis did, and he was penalized for it.

Students didn’t have to agree with him or like what he did. The fact that so many people are flipping out over nothing is the exact point he was trying to make.

After all, what makes you more patriotic? Exercising your rights or bowing down to symbols of our “freedom” no matter what? This school district has wrongly settled on the latter.

(Thanks to @tulsaisweird for the link)