When administrators at John Battle High School in Virginia let the Student Council Association design a t-shirt for Homecoming week, they didn’t realize that the winning entry had a Christian cross on the bottom. They decided to remove it — to make sure they weren’t promoting religion and inviting a lawsuit — and that move has prompted a strong reaction from students and parents who are ignorant of the law and who believe the school is somehow infringing upon their rights. 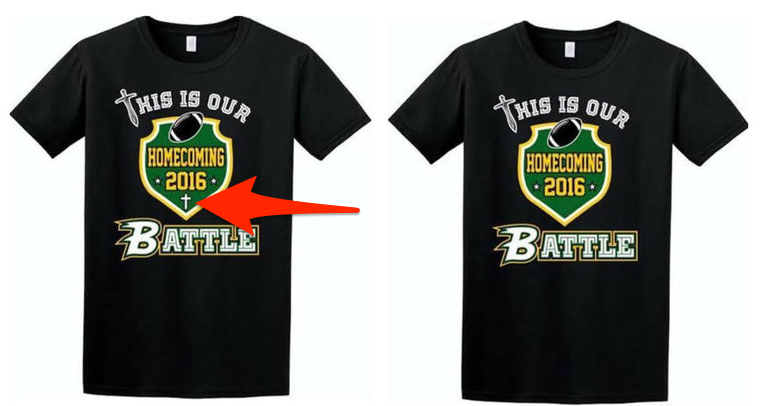 “The winner had a religious symbol on it, which we did get a complaint about it,” said Randy Poole, principal at John Battle High School. “It wasn’t a major complaint but there was a complaint, and I made the decision that probably that didn’t need to be on there.”

“I think it was the only decision to make,” said Poole. “It was just of those situations that sometimes you have to protect everybody’s rights and, you know, it was a situation that a decision had to be made.”

He’s doing exactly what he should be doing. Remember: This was a shirt that would be made available to students on behalf of the entire school. It’s the “official” shirt for Homecoming, not one made by a Christian club.

Not that the students understand that.

In the school hallway dozens of students have placed crosses and religious passages on their lockers in protest.

“Students, they make these designs because that’s what they want,” said student, Kaitlyn McCraw. “It shows what we believe in.”

To put it bluntly, no one cares. Those protests are perfectly fine — and a silly reaction to the situation at hand. There’s a difference between students’ beliefs, which are protected by law, and what the school promotes.

One man is privately organizing sales of the original shirt — more than 460 have been ordered — and students who want to will be allowed to wear them today.

Principal Poole doesn’t mind that at all:

Students will be allowed to wear the original shirts with the cross on them at school on Friday ahead of the school’s homecoming game, Poole said. Students will not face any type of disciplinary action or be forced to change into a different T-shirt while at school.

“They can wear the shirt if they want to, I don’t have a problem with it,” Poole said. “We won’t have any issues as long as our students don’t disrupt the educational learning process.”

He gets it. If students want to promote their religion in a non-disruptive way, the school can’t get in the way of that. But the school cannot promote religion as an institution. That’s why the cross on the shirt had to go.

What’s incredible is how so few of the critics seem to acknowledge that. A local church put up a sign reading “We support the cross at Battle,” as if the school is supposed to be an extension of the church.

Students are protesting… but against what? The school isn’t against them. The law isn’t against them. No one is being anti-Christian. This is about making sure the separation of church and state is respected. If they don’t know that, maybe they should spend more time studying their government textbooks than putting up Bible verses in their lockers.

(Thanks to Ky for the link)

September 23, 2016
Gary Johnson: Why Bother Tackling Climate Change When the Sun Will Eventually Engulf the Earth?
Next Post