Gary Johnson: Why Bother Tackling Climate Change When the Sun Will Eventually Engulf the Earth?

If you’re Libertarian Party candidate Gary Johnson and you want to get everyone’s mind off of how you didn’t immediately know what Aleppo was, how do you do it?

Apparently by saying we shouldn’t worry about tackling climate change because our whole species will eventually die out. 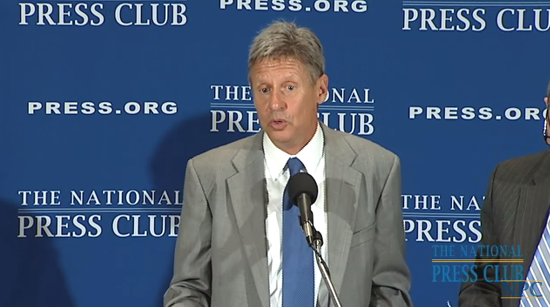 Climate change. I think the world is getting warmer. I think that it’s man-caused. That said, should we be engaged in cap-and-trade taxation? No, I don’t think that we should. We should lend certainty to the energy field. We should be building new coal-fired plants.

When you look at the amount of money that we’re looking to spend on global warming, in the trillions, and look at the result, I just argue that the result is completely inconsequential to the money that we would end up spending, and that we could direct those monies in other ways that would be much more beneficial to mankind.

But if we don’t tackle climate change, we could feel the effects in decades, with several cities experiencing mass flooding to the point where they’re uninhabitable before long.

It’s also a very nihilistic point of view that could be applied to any of the ideas Johnson wants to support. Jamie Peck at Death and Taxes puts it well:

Like, what’s the point of legalizing marijuana and abolishing the Federal Reserve when the sun is going to burn our great (to the hundredth power) grandchildren to a crisp in a few billion years, anyway? Remind me to use that next time my partner bitches at me to do the dishes.

His response — let’s do nothing because it won’t matter in the long run — is far more disturbing to me than a momentary lapse in geography (or, as he put it, a misunderstanding of the question).

Inaction is pretty much the worst thing we can do here. Johnson isn’t a climate change denier, but his proposal to deal with the issue is no different the the Republicans who don’t even believe it’s a problem.

This is just one of many reasons I can’t bring myself to vote for Johnson. Not that he should care. He’ll be dead in a hundred years, anyway.

September 23, 2016
Christian Right Leader: Witches Are Advising the "Senior Leadership of the Country"
Next Post