Christian Right Leader: Witches Are Advising the “Senior Leadership of the Country”

When televangelist Jim Bakker is the second craziest guy on the panel, you know you’re doing something wrong with your life.

Bakker had a segment on his show yesterday where he brought up President Obama‘s recent nomination of a Muslim federal judge as proof that his administration is giving “preferential treatment” to Muslims… which is an absurd notion. As if Abid R. Qureshi was nominated because he was a Muslim and not because his credentials are impeccable. Meanwhile, Christians make up every branch and twig and leaf of government, but Bakker doesn’t think there’s anything weird about that.

Anyway. That wasn’t even the worst part of the segment. His guest, Robert Maginnis, a senior fellow with the Family Research Council and a former Army lieutenant colonel, responded to Bakker’s claim with an even more ludicrous one: 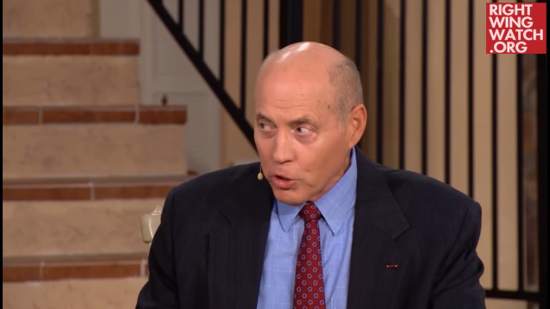 … I know that there’s demonic forces in that city. I have personally met people that refer to themselves as witches, people that say they advise the senior leadership of the country. We invite within the federal government people to advise us, and often some of those advisers, I think, have evil motivations, things that you and I would not approve of.

There are witches in the government! Witches who want poor people to have access to health care, and who give LGBT people the same rights as everyone else, and who try to protect the environment. Horrible, horrible witches.

I suppose it’s only appropriate that Obama has been advised by witches, since we may soon have an administration advised by flying monkeys and run by someone with no brain, heart, or courage.

September 23, 2016 Gary Johnson: Why Bother Tackling Climate Change When the Sun Will Eventually Engulf the Earth?
Browse Our Archives
What Are Your Thoughts?leave a comment