Atheist Ireland just became the first explicitly non-theistic advocacy group to speak in front of the full UN Human Rights Council in Geneva, and leaders of the group used the opportunity to denounce their nation’s blasphemy laws, ban on abortion, and religious discrimination in public schools. 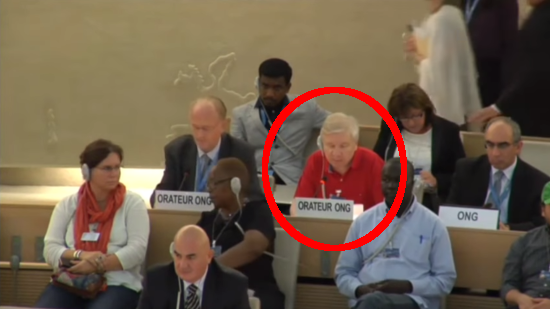 Jane Donnelly and Michael Nugent represented the Irish organization (which is a member of Atheist Alliance International, a group with “accredited observer status” at UN meetings).

Here’s a transcript of the speech delivered by Nugent:

The chairs of both major UN Human Rights Committees have strongly criticised Ireland’s lack of separation of church and state.

Ireland now claims that it is constitutionally obliged (not merely permitted, but obliged) to allow religious discrimination, in order to buttress religion, including in publicly funded schools.

Ireland needs a Religious Equality Referendum to be able to meet its UN human rights obligations.

Ireland should urgently hold a referendum to remove the offence of blasphemy.

The Organisation of Islamic Cooperation seeks global laws against defamation of religion. As part of this, Pakistan at the UN has cited specific language from the Irish blasphemy law.

Heiner Bielefeldt, United Nations Special Rapporteur on Freedom of Religion, has advised us:

“The major damage done by this law is international. Those countries that have an intimidating anti-blasphemy practice like to quote European countries to unmask Western hypocrisy.”

Nine different sets of United Nations and Council of Europe committees have concluded that Irish schools breach the human rights of atheist and minority faith children, families and teachers.

Irish schools breach very fundamental human rights like freedom of religion and belief, freedom from discrimination, equality before the law, and no effective remedy.

Ireland should oblige publicly funded schools to deliver educational services, including employment, state curriculum and enrolment, in an objective, critical and pluralistic manner, and with no religious discrimination of any kind.

We support the many recommendations to strengthen women’s right to abortion in Ireland.

We support the Campaign to repeal the Eighth Amendment of the Irish Constitution, to enable the Irish Parliament to legislate for the right to abortion.

Whether pressure from the UN will get the Irish government to take up these issues is up for debate, but silence will accomplish nothing. Most people, I suspect, would never think of Ireland as a place where human rights are in jeopardy, but the atheists there have done a remarkable job of bringing these concerns to the public’s attention.