This is What Happens When a Religious Studies Graduate Reviews the Bible on Amazon September 22, 2016 Hemant Mehta

I don’t remember what I was doing that night when I accidentally stumbled upon the comments section of a Bible page on Amazon.com (English Standard Version, Single Column Journaling edition, Trutone, Chestnut, Leaves Design, Jesus-approved), but inspiration finds you when you least expect it, right?

What I do remember is that there wasn’t a single honest, fair review of the Christian holy text from a literary perspective. As someone who went to college for English and Religious Studies, I felt I was up to the task. 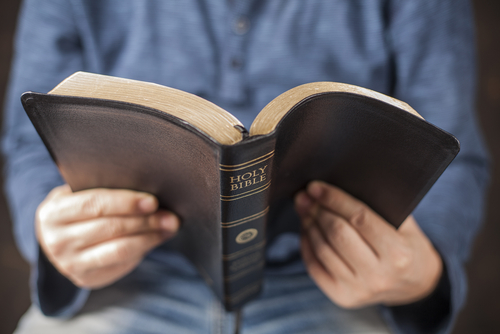 Plot is derived, history is inaccurate, but book has wide appeal to criminals and crazy aunts.

The story starts off in Genesis, which, contrary to popular belief, is not a rip-off of a popular English rock band. The Genesis creation narrative is copied from someone, though: the Babylonians! Researchers have shown that the story and order of creation were influenced by or derived from the Enuma Elish. As if that wasn’t bad enough, the Genesis narrative contradicts itself over and over again, making the story unintelligible at times. Ultimately, this book of the Bible left me with more questions than answers. I was left asking myself, “Why would an all-powerful god need six days to create the earth? And why would it need to rest afterward?”

If you power through Genesis to Exodus, there are some pretty cool stories. Nothing to write home about it you are looking for something within the realm of possibility, but the main antagonist Yahweh turns the rivers to blood and makes it rain… frogs. The Book of Exodus is interesting, but, unfortunately, not very believable. Anyone who has studied the history of the region knows that the Israelites were never slaves in Egypt, which invalidates the “exodus” entirely. This is also the book in which Yahweh “hardened” Pharaoh’s heart so that he wouldn’t listen to Moses, an action that is both unreasonable and scientifically inaccurate.

The next books in the Bible are Leviticus, Numbers, and Deuteronomy, which all retell the exodus story with slightly different details. Together, these first five books make up the Pentateuch, also known as the Torah. We’ll have to skip over much of these sections, considering they contain divine endorsements of slavery, orders to kill those who work on the Sabbath day and homosexuals, and instructions for rapists to marry their victims. The disturbing passages are especially surprising considering the Ten Commandments appear twice in this section, first in Exodus and then in Deuteronomy. Forgetting the fact that the commandments came after similar legal codes from neighboring cultures, divine regulations on stone tablets has always seemed odd to me. When you etch your moral code in stone, you have no room for editing. You leave open the possibility that, as our ethical views evolve, your code becomes less relevant. You could find yourself four of ten divine moral laws describing how to treat God and zero that prohibit rape or slavery.

“If you think that it would be impossible to improve upon the Ten Commandments as a statement of morality, you really owe it to yourself to read some other scriptures. Once again, we need look no further than the Jains: Mahavira, the Jain patriarch, surpassed the morality of the Bible with a single sentence: ‘Do not injure, abuse, oppress, enslave, insult, torment, torture, or kill any creature or living being.’” ― Sam Harris, Letter to a Christian Nation

Skipping to the New Testament, we find Matthew, Mark, Luke, and John, known as the four canonical gospels. These gospels, which contradict each other a number of times, purport to represent different versions of actual events. For this section, I’d like to post an excerpt from my first book, Disproving Christianity:

“When placed side by side, however, a biblical scholar is led to the conclusion that each of these stories, while clearly inspired by the same root story, omits or includes details that are crucial within the sibling texts. For example, only the canonical gospels of Matthew and Luke make mention of the supposed virgin birth of Jesus Christ, a tenet that is considered extremely important to later doctrine and modern teaching.”

These contradictions are especially confusing considering the fact that the Synoptic gospels, Matthew, Mark, and Luke, were written at least 35-65 years after the supposed death and resurrection of Jesus by people who could not have been actual eyewitnesses. These are considered, by the vast majority of secular and religious experts in the field, to be “anonymous texts” because the authors never divulge their names. According to New Testament Scholar Bart D. Ehrman, these stories “circulated anonymously, for years and decades.”

“We have no certain evidence that they — these particular Gospels — were called by their familiar names until around 180 CE, in sources connected with Rome. At this stage, what we can say with certainty is that the Gospels are quoted in the early and mid-second centuries by protoorthodox Christian authors, who never identify them as Matthew, Mark, Luke, and John.”

There are a number of other books of the New Testament, many of which include beautiful stories and important moral lessons, but my attention wasn’t piqued again until 1 Thessalonians. The Rapture begins in 1 Thessalonians 4:15–17:

As I began reading Revelation, the last book of the Bible, I saw the light at the end of the tunnel. I also learned all about the prophesized Second Coming and how believers think Jesus will descend from heaven on a white horse wearing a robe dipped in blood. The Prince of Peace will then wage war and defeat the Anti-Christ (the beast) and Satan the Devil in the Battle of Armageddon. According to scripture, a sharp sword will come out of His mouth, so that “He may strike down the nations that rule them with a rod of iron.” Christians believe that Jesus will cast the devil into the Abyss and seal it for 1,000 years, and that He will resurrect human bodies from their graves, letting the good live again and condemning the evil. There are dragons, beasts with ten horns and seven heads, angels, and a lamb with seven horns and seven eyes. Christians believe that this event could happen at any time, and many believe it will happen within their own lifetime. It was… a fitting end to an unbelievable tale.

September 22, 2016
Christian Leader Explains Why He Can't Get On Board With Fellow Evangelicals in This Election
Next Post

September 22, 2016 The Catholic Church Acquitted an HIV-Infected Priest Who Raped 30 Girls, Say Gullible Websites
Browse Our Archives
What Are Your Thoughts?leave a comment