The 6 Biggest Takeaways from a Study Documenting the Amazing Rise of Non-Religious Americans September 22, 2016 Hemant Mehta

A new study released today by the Public Religion Research Institute documents the incredible rise of religiously unaffiliated Americans (“Nones”), but also offers up some sobering truths about this diverse group of atheists, agnostics, and people who believe in God but don’t subscribe to any organized religion. 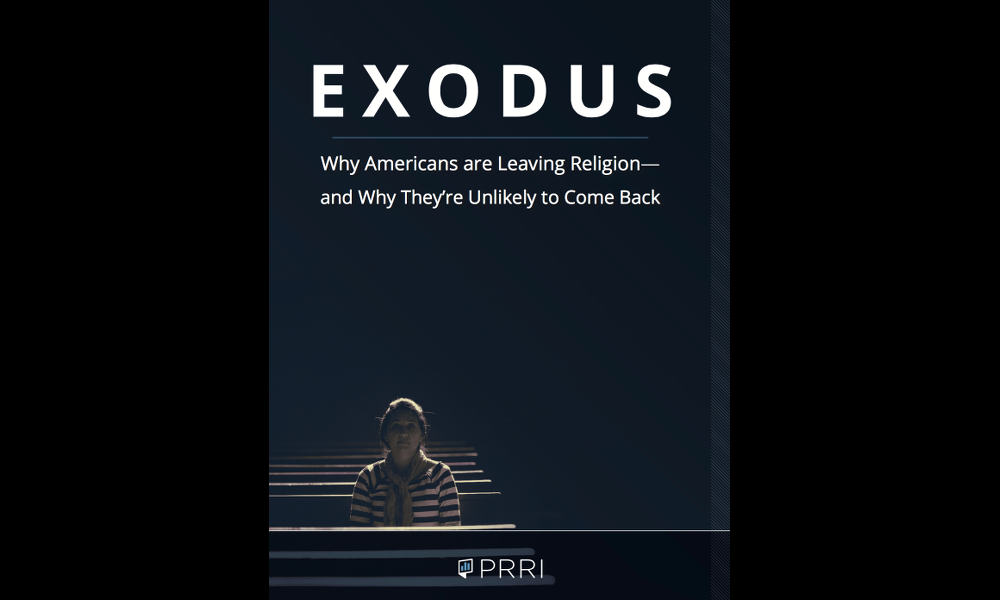 Here are the six biggest takeaways:

1) Nones are a quarter of the population, making us the largest “religious” demographic in the country. 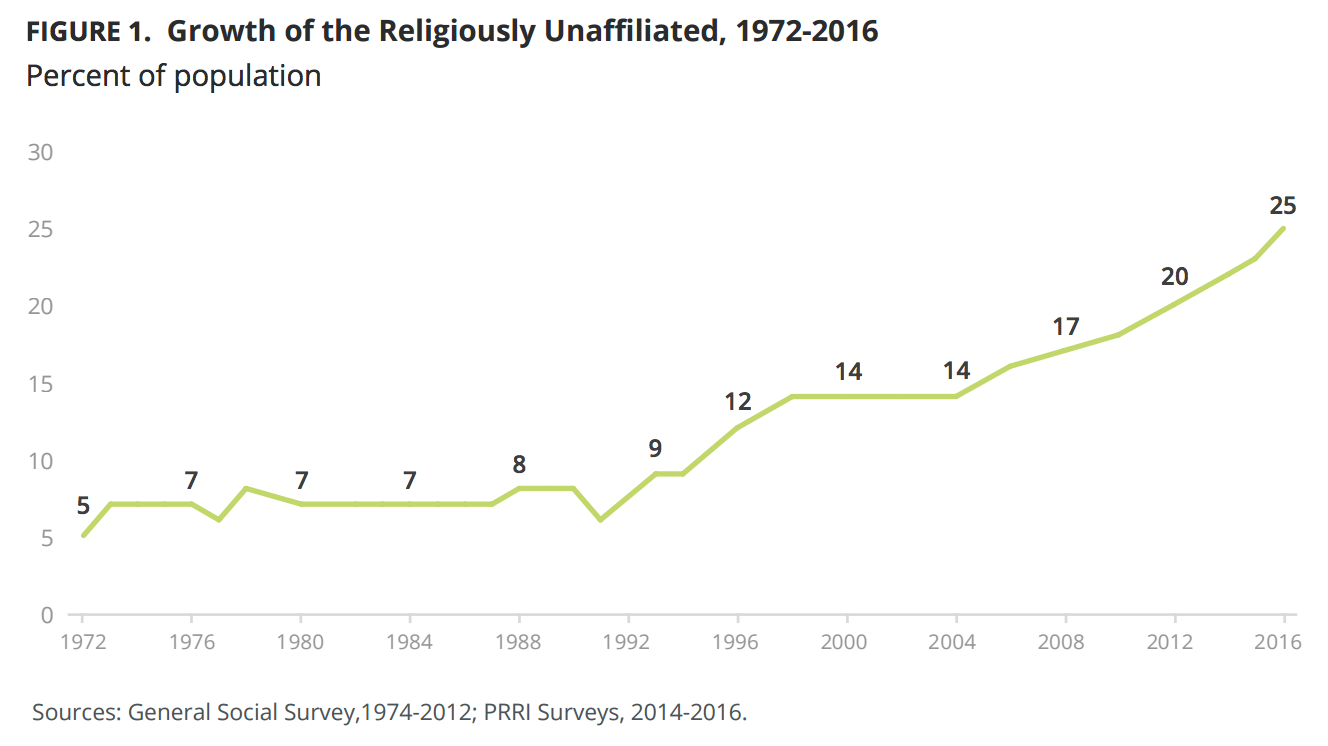 The best part of that chart? There’s no sign of a plateau. For all we know, that percentage will only go higher in coming years.

2) While the Nones have grown in each age bracket, the largest jump is seen in the youngest age group. 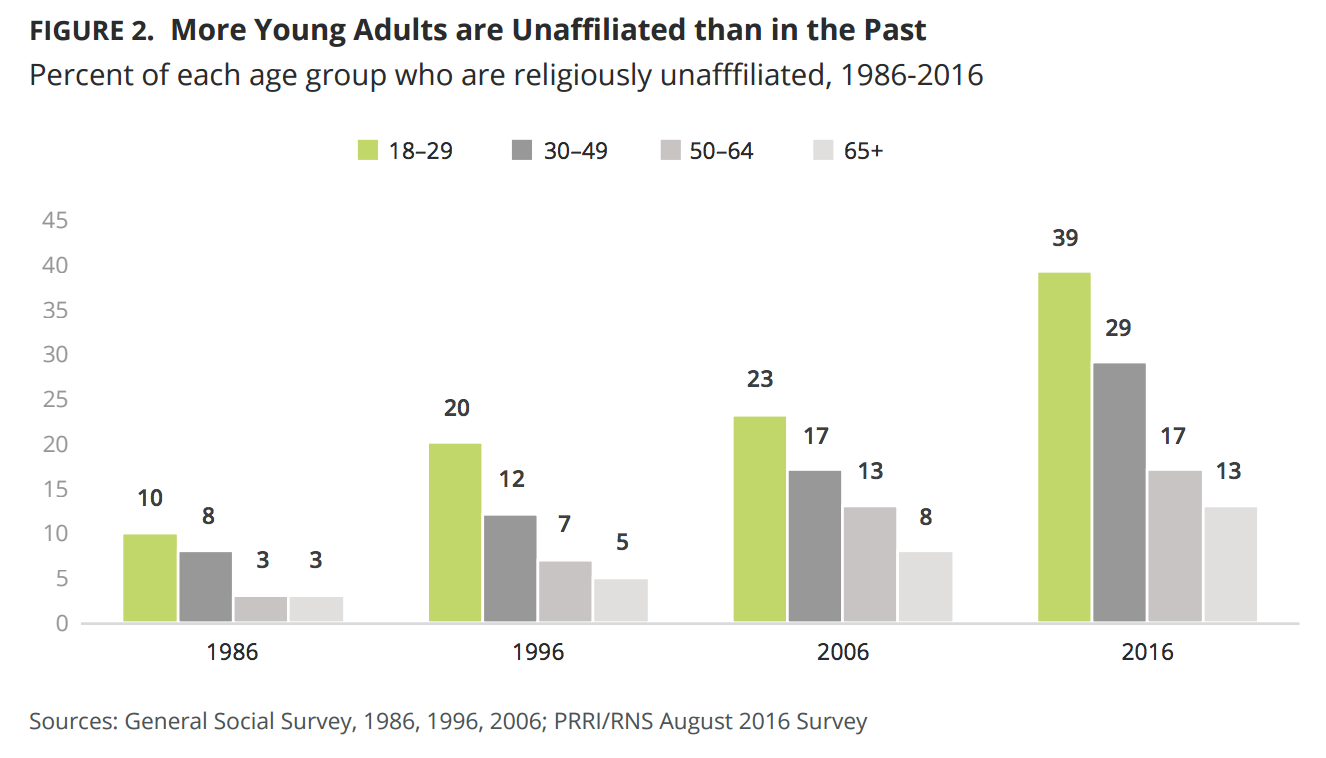 This is a big deal. If 39% of people under 30 are non-religious (and they remain that way in the future), it suggests that Nones will dominate the landscape in a generation. If we can harness those numbers, which is a tall order, the political impact would be incredible.

3) When it comes to switching religions, a lot of people are running the hell away from the traditional powerhouses. And we’re there to welcome them. 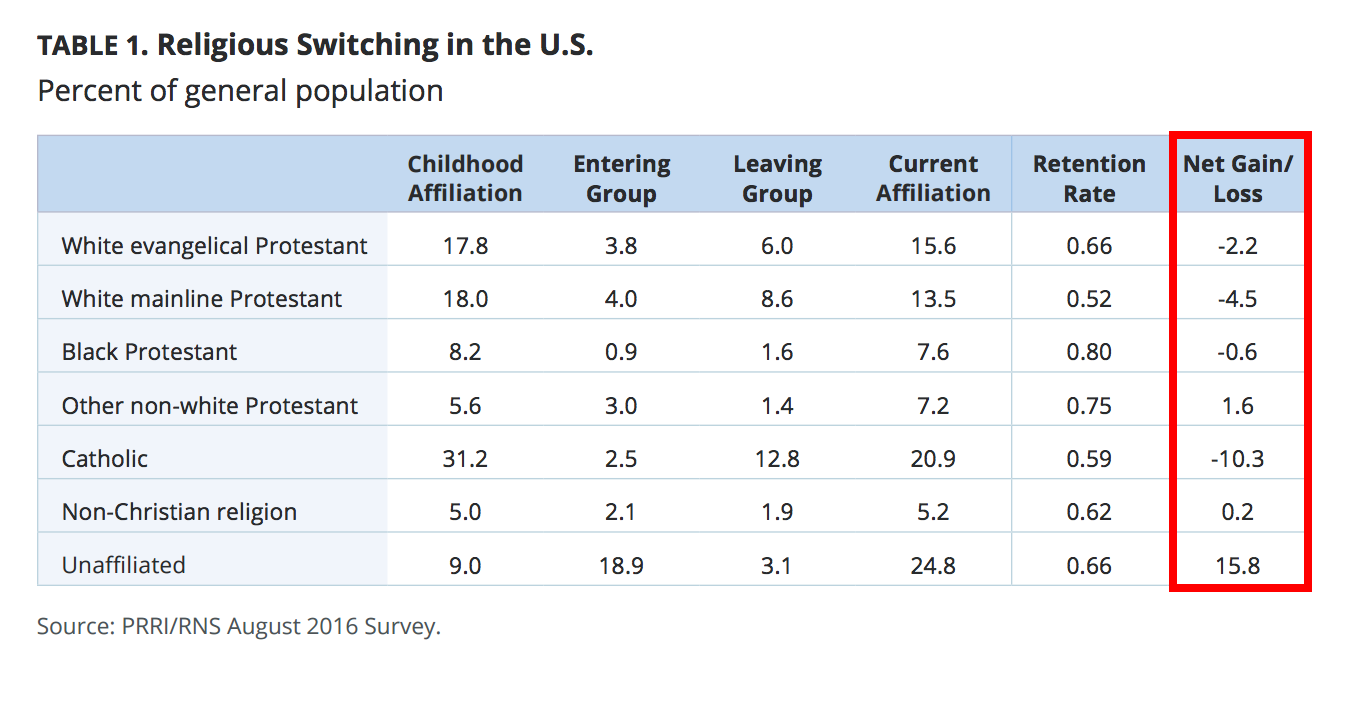 Look at those glorious negative numbers. There are small blips — an increase in adherents — for non-white and non-black Protestants and other non-Christians… but the lion’s share of the growth is with the group unaffiliated with any organized religion. Hallelujah!

4) People are leaving religion because they just don’t believe in the bullshit. 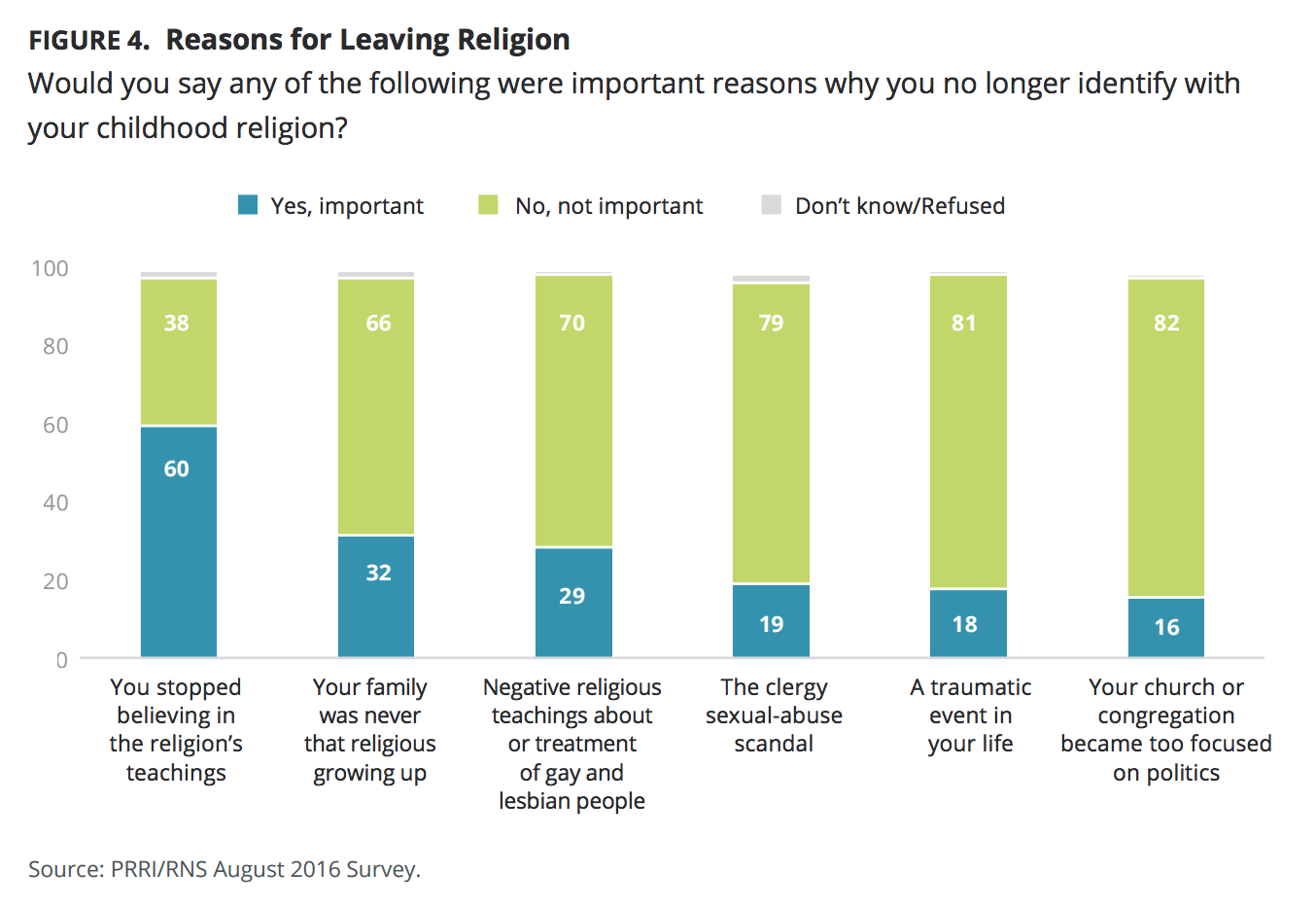 There’s a pernicious belief that people become atheists because they “hate” God, went through something traumatic, or had a bad church experience. All of those things, many Christians will tell you, can be overcome with a better presentation of Jesus’ love. These results show that people are not leaving religion for superficial reasons. They’re leaving because they educated themselves and realized their pastors were selling them a work of fiction. The way certain religions treat LGBT people is much lower on the list.

5) Among the “Unaffiliated,” the “Rejectionists” who are not religious at all and see religion as harmful (hi, readers!) make up the bulk of the group (58%). 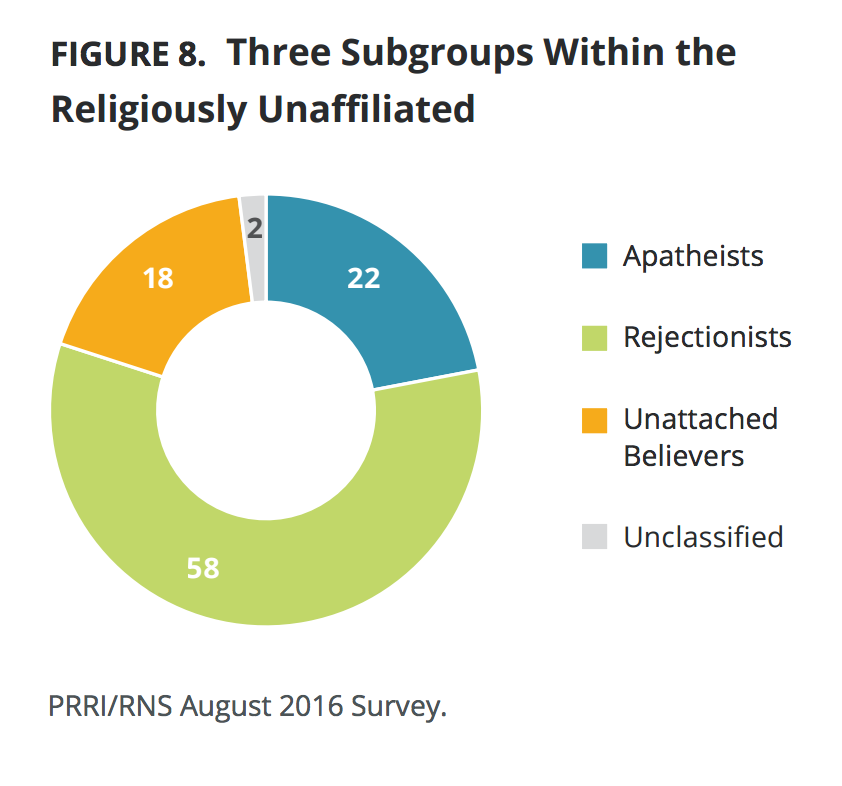 22% of the Nones are “Apatheists” who aren’t personally religious but don’t really think it’s a bad thing. 18% are “Unattached Believers” who believe in God but reject organized religion. 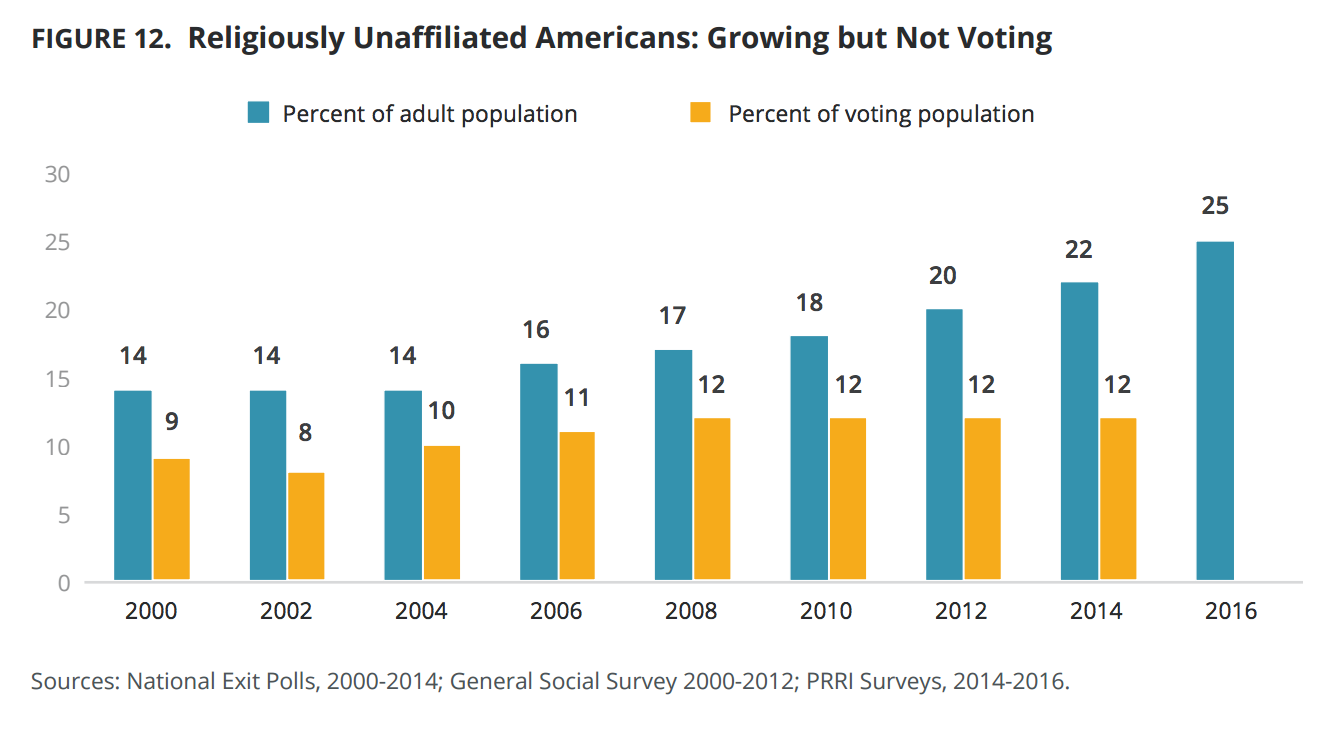 This is seriously disturbing. For all our growth as Secular Americans over the past decade, we have barely budged when it comes to the percentage of us who vote. We’re 25% of the American population… and a mere 12% of the voting population. That’s pathetic and it’s the sort of apathy that allows the Religious Right to flourish despite their diminishing numbers.

“For me the big question is ‘will this [Unaffiliated] group come out in November and really throw their weight around?’” said Daniel Cox, PRRI’s research director and a co-author of the study. “They could have considerable impact on the political direction of the country but have so far chosen not to do so.”

This should be a wake-up call to all of us.

We’ve spent so much time trying to get people to shed their faith. We’ve worked so hard to see those Unaffiliated numbers jump up as much as they have. And yet we have been dreadful at using that potential energy to achieve our goals. There’s no point in having a quarter of the population reject formal religious affiliation if we can’t get religion out of politics, if we can’t keep church and state separate, if religious groups still get special privileges they don’t deserve.

Why is that happening? Well, if you’re religious, your religious leaders can guide you and guilt you into voting for certain candidates. If you’re an atheist, you’re not going to do something just because someone like Richard Dawkins suggested it. We’re the ones who will ultimately vote for a third party candidate out of principle instead of the Democrat who has the best chance to win, and then spend years complaining after Donald Trump waltzes into the White House. We’re so ethical in our own minds that we don’t give a damn about strategy or long-term goals.

We can be too rational for our own good.

September 22, 2016
Here Are 10 Ways Humans Are Still Evolving
Next Post

September 22, 2016 Christians Lay Hands on Donald Trump To Protect Him From "Concentrated Satanic Attack"
Browse Our Archives
What Are Your Thoughts?leave a comment