On his show this week, televangelist Jim Bakker talked about how there are groups — hello, Right Wing Watch! — that monitor the things he says because they want him off the air.

Then, going full conspiracy theory, he said that people like him who are “speaking up for our Constitution” are mysteriously dying and will continue to die off in the future. Which is probably a frightening prospect for his viewers, whose average age, I can only assume, is 97. 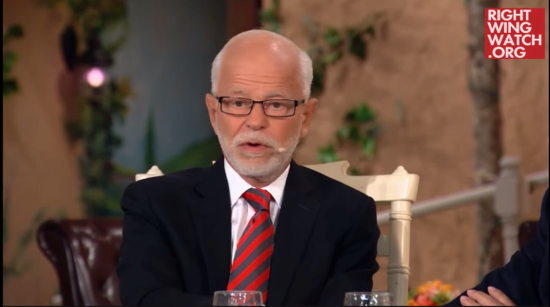 “You want to know why the church has been shut up? Why no one is talking about what’s going on?” he asked. “We’re being monitored. Hi guys. We might as well wave to them. The Bible says I gotta love you so I’m gonna try. There’s monitoring groups — I won’t name them right now because I don’t want to get into a fight with them — they do nothing but monitor all speech, especially religious speech and anyone who is speaking out on the opposite side of what they believe, and they are studying every word we speak and anyone who is speaking for freedom, the old fashion, the Constitution, all that, they want us off the air.”

After cautioning viewers not to use certain “key words” on the phone, Bakker said that “if you see spokespeople and people who are speaking up for our Constitution and for the other side, you might say, than what’s popular today, just remember if you see them dying in car accidents, plane wrecks and all kinds of things, look into it a little deeper, a lot of that’s going around.”

To be clear, watchdog groups tracking right wing rhetoric don’t monitor people like Bakker to get him off the air. (Or to get intel to physically destroy him.) They do it to broadcast to the world what they’re saying, often to people only in their bubble. They’re not manipulating the words; they’re shining a spotlight on them, in the hopes that people will understand just how disturbing conservatives are.

For all the talk about a biased liberal media, the fact is conservatives are their own worst enemy. If Bakker doesn’t like the way he’s portrayed, all he has to do is stop saying ridiculous things.

September 22, 2016
In 2008, Focus on the Family Predicted the Results of an Obama Presidency. They Were So, So Wrong.
Next Post