Yesterday, at the Midwest Vision and Values Pastors Leadership Conference in Cleveland, Ohio, a group of Christians put their hands on Donald Trump to protect him from Satan. Because cartoon villains are nothing without their imaginary shields. 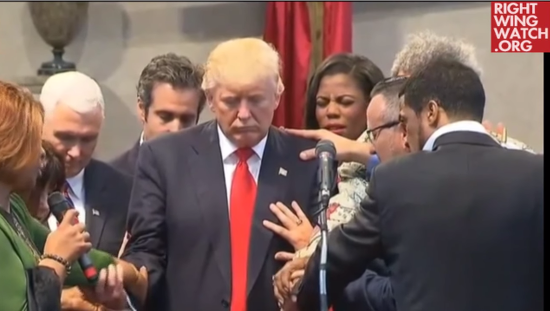 [Pastor Darrell] Scott, who hosted the event at his New Spirit Revival Center, told the audience that a “nationally known” preacher warned Trump before he launched his campaign “that if you choose to run for president, there’s going to be a concentrated Satanic attack against you.”

“He said there’s going to be a demon, principalities and powers, that are going to war against you on a level that you’ve never seen before and I’m watching it every day,” Scott said.

Later, Scott’s wife, Belinda Scott, prayed over Trump: “God we ask you right now that Your choice is this choice.”

“God, I ask that you would touch this man, Donald J. Trump,” she continued, “give him the anointing to lead this nation.”

Satan couldn’t be reached for comment, but I have to assume his minions are working their hardest to protect him from Trump.

September 22, 2016
The 6 Biggest Takeaways from a Study Documenting the Amazing Rise of Non-Religious Americans
Next Post

September 22, 2016 Hate-Pastor Claims Victory for Christ in Botswana After Several Members of His Church Are Deported
Browse Our Archives
What Are Your Thoughts?leave a comment