Christian Leader Explains Why He Can’t Get On Board With Fellow Evangelicals in This Election September 22, 2016 Hemant Mehta

Brian McLaren, long known as a leading voice for the Religious Left, has a must-read piece at Religion News Service about why he’s breaking up with what he calls the “Conservative Evangelical Project.” That is, the Christians who more or less demand that everyone vote for the Republican candidate, no matter what. 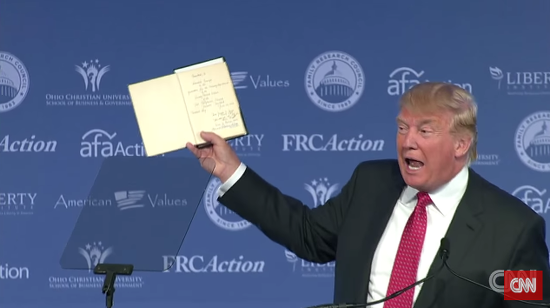 McLaren can’t figure out why they’re so enamored with Donald Trump, a candidate whose actions go against the Christian values they supposedly hold so dear. That’s why his list looks like something pulled from a liberal website.

2. I can’t support regressive thinking that longs for a time when life was worse for nearly everybody except people like me.

Whether you like President Barack Obama or not, former religious right activist Frank Schaeffer told the ugly truth about contemporary conservatism: It has carried out a vicious “slow motion lynching” of our first African-American president. Today’s conservatives have been undermining voting rights for minorities, vilifying immigrants, scapegoating LGBTQ people, and resurrecting white privilege and white supremacy to maintain systemic injustice. One simple word in Trump’s campaign slogan — “again” — harkens back to a time of deep discrimination against everyone who doesn’t look like or pray like me.

He also points out — correctly — that he’s sick and tired of being lied to about abortion. McLaren would like to see abortion rates decrease, and that’s happened… under Democratic presidents. It turns out limiting access to the procedure, as many conservatives have tried to do with some success over the years, does nothing to curb abortion rates. It just makes women resort to more drastic measures to obtain them.

It’s one of the more peculiar aspects of this election that so many evangelicals are rallying behind Trump. I guess a little pandering really does go a long way when the people you’re trying to reach are so gullible that they’ll believe anything you say, even when you’re so obviously lying about it.

September 22, 2016
Hate-Pastor Claims Victory for Christ in Botswana After Several Members of His Church Are Deported
Next Post