A woman in Punta Gorda, Florida claims a cop ticketed her for being a Christian, punishing her for a sign on her windshield that says “What Would Jesus Do.”

The cop says faith had nothing to do with it. He gave her a ticket because Florida law forbids vinyl signs on cars that go below a certain point on the windshield, thereby obstructing the driver’s view. 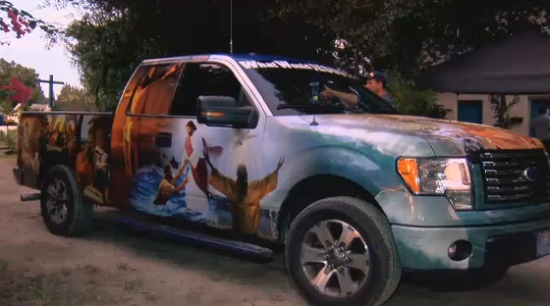 “First thing he said to me, he said, ‘I want you to know that you are breaking the law.’ And I said, ‘How am I breaking the law, sir?’ He said, ‘With that sign up there, that Jesus thing up there,'” she said.

She’s not going to court for Jesus. She’s going to court to defend her own negligence. She may say the sign doesn’t obscure her view, but people who text while driving will also tell you they see everything in front of them. It’s irrelevant what they think; the law applies to everyone.

In this case, there’s a simple objective way to decide the issue:

Every car has a line on its windshield that marks the lowest point tint or transparent vinyl can go before it legally obstructs a driver’s view.

If her sign went below that line, there’s nothing to argue. If it’s above the line, she’ll win her case. Simple as that. Jesus has nothing to do with it.

Jones will be in court tomorrow to make her case.

(Thanks to Pamela for the link)

September 21, 2016
Campus Preacher Who Said Women Deserve Rape Arrested for Kicking a Woman in the Chest
Next Post