How Hillary Clinton and Donald Trump Measure Up On Science Issues

Science certainly isn’t the hottest topic on the campaign trail, but it may be one of the most important. That’s because the two frontrunners for President disagree substantially and frequently when it comes to issues that affect our future as a nation, including climate change, vaccinations, and more.

With the election approaching in less than two months, Hillary Clinton and Donald Trump have already made a number of statements on issues that matter most to the scientific community. These are the same topics that most drastically impact healthcare, safety, and the environment, so let’s bring them into focus. 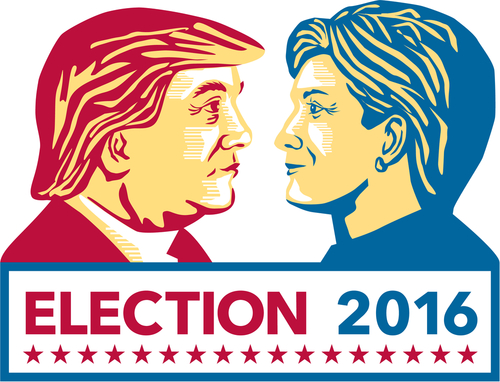 One of the most important issues facing our nation in future generations, global climate change, is also one that reveals the starkest contrast between Clinton and Trump. On one hand, you have a billionaire real estate magnate who has called global warming a “hoax” that was “created by and for the Chinese,” and on the other you have a politician who has warned about the “catastrophe that would result from unchecked climate change.”

Clinton has also set forth a set of national goals to generate more renewable energy, cut waste, and reduce American oil consumption, while Trump has called her plan an “extreme, reckless anti-energy agenda.”

Trump’s fervent disagreement with Clinton and science advocates around the world when it comes to global climate change has continued throughout the campaign, with no signs of slowing down, despite his position being invalidated by the scientific consensus.

When it comes to energy in general, we see some alignment between Trump and Clinton. Both are in favor of utilizing wind, solar, and bio-fuels, but Clinton has promised to deliver on President Obama‘s Paris climate conference pledge. That includes extending smart pollution and efficiency standards, launching a $60 billion Clean Energy Challenge, investing in clean energy infrastructure, ensuring fossil fuel production is safe and responsible, and more.

Trump has said his priority is “to achieve energy independence”:

A thriving market system will allow consumers to determine the best sources of energy for future consumption. Further, with the United States, Canada and Mexico as the key energy producers in the world, we will live in a safer, more productive and more prosperous world.

It should also be noted that Trump has proposed bombing oil fields in the hands of ISIL and attacking North Korean nuclear facilities, actions for which the consequences could be unimaginable.

When it comes to life-saving vaccinations, we see another major difference between the two frontrunner candidates. Trump claimed in 2014 that vaccines cause autism, despite the fact that the hypothesis has been thoroughly debunked, and has continued to push similar rhetoric since then. Clinton, however, has been an advocate of vaccines and their efficacy. She once tweeted, “The science is clear: The earth is round, the sky is blue, and #vaccineswork. Let’s protect all our kids.”

In a recent presidential science survey, Clinton said she would press hard for the elimination of deadly diseases through the use of vaccines and Trump said the public should be educated “on the values of a comprehensive vaccination program.” Neither candidate has outwardly opposed all vaccines.

When asked about how American students have fallen behind in science and math rankings around the world, Clinton promoted Obama’s “Computer Science for All” initiative and promised to invest in updated lesson programs. She also promised to support the training of 50,000 computer science teachers over the course of 10 years. Trump’s answer to that same question was, “There are a host of STEM programs already in existence.”

What the federal government should do is to make sure that educational opportunities are available for everyone. This means we must allow market influences to bring better, higher quality educational circumstances to more children.

Trump also says state and local governments should manage public education institutions, and not the Department of Education.

Until more choices are provided in our cities, those who tout their concern about educational outcomes cannot be taken seriously.

This is only a small sampling of the important science issues on which Trump and Clinton diverge, but it does give you an idea of where the candidates’ priorities lie. When it comes to matters of science, those issues that could help shape our nation for future generations, you can never analyze too much. In this case, a brief analysis shows how Trump is behind the curve when it comes to the American public and what matters most, while Clinton seems to grasp the crucial issues more completely.