A Male Student in Utah Complained That Cheerleaders’ Skirts Caused Him to Have “Impure” Thoughts September 20, 2016 Beth Stoneburner

A male student at Timpview High School in Provo, Utah — an overwhelmingly Mormon city — complained to authorities that the cheerleaders’ short skirts were causing him to have impure thoughts. The student’s mother also complained, and the girls were apparently told not to wear their uniforms at last Friday’s game. 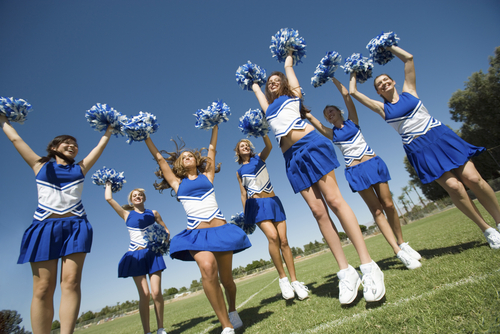 While the school struggles to save face for the media, insisting the whole thing was just a misunderstanding, the cheerleaders aren’t having it:

Most of the cheerleaders were upset about what happened, with one telling PEOPLE, “it’s giving this boy power that when he grows up and does something to a girl, he can blame it on her skirt being too short. It really made me angry. Why should this boy have control over what we wear?”

Several of the girls’ parents were also frustrated, calling the situation “nonsense.”

“It puts unfair pressure on the cheerleaders,” one mother tells PEOPLE. “I was shocked when my daughter came home and told me, ‘We can’t wear our uniforms on game day. They’re giving boys’ dirty thoughts.’ I want the school to have a meeting with all of the cheerleaders and all of the parents, and I want our girls to walk out of that meeting with their heads held high. This boy’s problem has nothing to do with them.”

Assuming this student’s complaint stemmed from a religious conviction, he may want to pick up his Bible and refresh his memory of Matthew 16:24: “Pick up your cross and follow me.” After all, Jesus never promised that being a disciple would be easy: it may require some to stay away from football games, the beach, or any other place where women wear “revealing” attire in order to avoid spiritual corruption.

For what it’s worth, the cheerleaders’ advisor says this whole story has been “blown out of proportion,” though the details of what actually happened are unclear.

September 20, 2016
Pastor Steven Anderson Deported from Botswana After Advocating for the Execution of Gay People
Next Post