Dalai Lama Wrongly Says Anyone Who Commits Violence in the Name of Religion Isn’t a True Believer September 19, 2016 Hemant Mehta

Speaking at the European Parliament in France last week, the Dalai Lama argued that anyone committing violence in the name of religion isn’t really a true adherent of that religion: 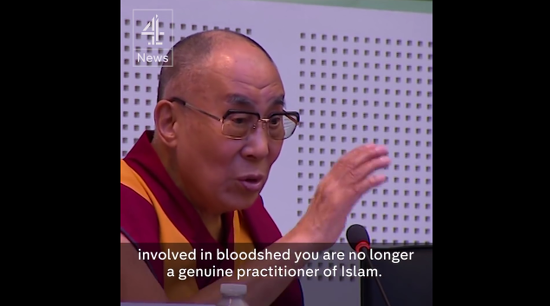 All major religious traditions carry the same message: a message of love, compassion, forgiveness, tolerance, contentment, self-discipline — all religious traditions… On that level we can build a genuine harmony, on the basis of mutual respect, mutual learning, mutual admiration.

That’s all very inspiring… but it makes no sense. Violence isn’t separate from religion. It’s baked right into the holy books of Islam and Christianity.

What we need are believers willing to admit their books include those verses and that they’re bad ideas that should be dismissed and condemned, instead of trying to rationalize them away. You can’t No True Scotsman your way out of this.

Religion alone isn’t responsible for all the violence we see today, but if people didn’t take their faiths so seriously — if they were allowed to critique it and admit the holy books can be wrong — maybe we’d see less death and destruction as a result.