Two Mothers Say Their Kids Shouldn’t Have to Change in the Locker Room Near Transgender Students September 18, 2016 Hemant Mehta

Two parents at Clovis Unified School District (in California) are complaining that their children have to share space with transgender children, causing them serious anxiety. 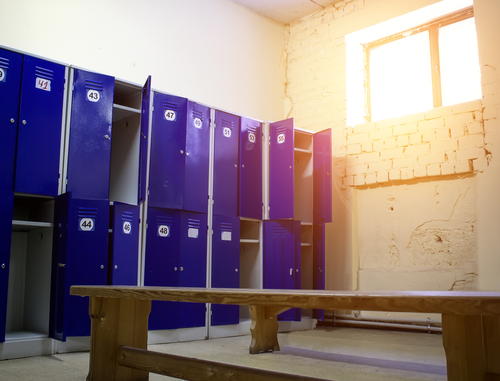 Clovis Unified’s Deputy Superintendent Carlo Prandini reminded us that children “being uncomfortable in locker rooms is not a new phenomenon. Body image and modesty are things P.E. instructors have had to deal with for decades.”

This issue is broader than transgender youth because many children might feel uncomfortable in changing rooms for myriad reasons. I mean, I dreaded changing alongside other cisgender girls in grade school.

Students should absolutely not be made to change or go to the bathroom in places that make them feel uncomfortable, but the answer to this problem is a private space that anyone can use in order to avoid singling out transgender youth.

Some parents reported that their children were forced to change in front of their lockers instead of being allowed a more private alternative, so Clovis Unified did the right thing: they installed private changing stalls for anyone that wanted to use them.

In addition to existing options for students such as using individual bathroom stalls or single-stall bathrooms on campus, Clovis Unified is adding additional privacy stalls in intermediate and high school locker rooms. The construction of new privacy stalls resulted from conversations with parents and community groups who, over time, have requested additional privacy options to respect the modesty of all students on campus.

If a parent does not want his or her child to use the multi-stall bathrooms available for student use, he or she is encouraged to contact school administration to discuss alternatives available for all students.

A process is in place through which we work closely with individual transgender students to identify an environment in which they are comfortable. Often, what our students feel comfortable with is a private bathroom or changing area such as the nurse’s office or single-person bathrooms, or a supervised, secluded section of a locker room or changing area…

Let’s be real. The overarching problem that exists here is not with the child who has been socialized by their parents to fear another child because of their gender identity. The very real problem is that we are fostering a society of fear. That culture is why transgender students are more likely to be kicked out of their homes by their families, often becoming homeless, and commit suicide at astronomical rates. If we want to overturn these horrific outcomes, what we need is compassion for transgender youth. Just because some students can’t deal with being around their transgender peers doesn’t mean there’s a problem with transgender people.

The problem isn’t just in our homes. Our politicians are waging an unprecedented onslaught of legislation against transgender youth.

According to the Human Rights Campaign, which I’ve volunteered off-and-on for since 2006, they’re tracking 44 anti-trans bills this year alone. That number includes:

Meanwhile, the two parents who complained about the shared accommodations received an apology:

“Accommodations should’ve been made like that,” Prandini said, snapping his fingers. “As you can tell, it’s a very passionate and complicated situation we’re in. Our goal as educators is to provide a positive environment for all of our students.”

Accommodations should have been made for anyone who felt uncomfortable, sure, but that can be fixed. The faith-based bigotry that sees transgenderism as a disorder requires more drastic change.

September 18, 2016
Charlotte (NC) Shouldn't Budge On LGBT Rights No Matter How Much Gov. Pat McCrory Threatens Them
Next Post