Charlotte (NC) Shouldn’t Budge On LGBT Rights No Matter How Much Gov. Pat McCrory Threatens Them

With North Carolina losing millions of dollars due to Gov. Pat McCrory‘s anti-LGBT bigotry, his government is looking for a fix. 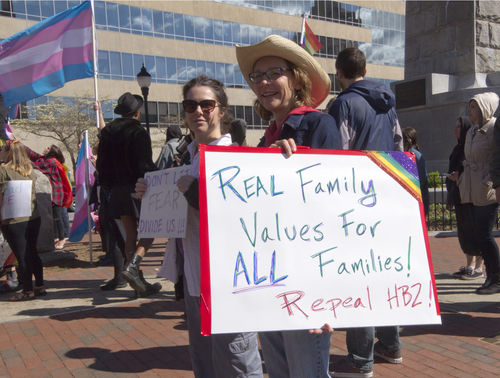 You might recall that the whole controversy began in February when the Charlotte City Council passed a resolution expanding anti-discrimination laws in public places to include LGBT people. That included allowing trans people to use bathrooms corresponding with their true gender. McCrory and the Republican-majority legislature then passed House Bill 2, which prioritized state law (without anti-discrimination protection for LGBT people) over local ordinances.

Since that awful bill passed, the NBA All-Star Game and several NCAA championship games have found new locations to avoid student-athletes being subject to discrimination in the state. And with them went a lot of major economic opportunities for the state. One conservative estimate is that the state has lost $230 million as a result of HB 2.

McCrory is in a tough re-election campaign right now, and HB 2 may be the reason he loses his job. He’s doing everything he can to turn the tide.

His latest gambit? Promising to reconvene the General Assembly before it official meets again in January and overturn the law… but there’s one condition. The Charlotte City Council has to repeal the ordinance that started this whole thing.

The end result would be that LGBT people aren’t protected in the state at all. That’s the same bigotry as before. The only difference is that McCrory is hoping to take the pressure off of him and put it on the Charlotte City Council. If they refuse to play his game, he can then tell everyone, “I wanted to repeal the law, but the elected officials in Charlotte wouldn’t let me!”

The City Council, which meets Monday, hasn’t decided what to do. But I hope they stick to their guns.

If the Republican leaders in the state don’t like the consequences of their actions, they should fix it. It’s not the city of Charlotte’s fault that their leaders did the right thing.

What’s stunning is that the North Carolina Restaurant & Lodging Association, representing hundreds of thousands of employees, now wants to throw LGBT under the bus in order to get back all the customers they’re losing because of things like the NBA/NCAA withdrawal:

The hospitality industry has become collateral damage in a fight it did not start or ask for. Restaurant and lodging businesses and their employees are suffering the adverse impact of these policies though lost business and wages.

The North Carolina Restaurant & Lodging Association calls on Charlotte City Council to repeal ordinance #7056 immediately, on Governor McCrory to convene a special session of the NC General Assembly, and on the NC House and Senate to repeal House Bill 2 in its entirety.

What a horrible idea. No one should compromise on human rights and basic decency. The Association’s press release treats Charlotte leaders as part of the problem along with McCrory, as if they all have to work together to fix a mess the people in Charlotte didn’t create.

It’s infuriating that anyone would ask anybody but McCrory and the legislature to change. This problem will be solved when HB 2 is repealed. End of story. Charlotte shouldn’t budge.

North Carolina is suffering because of a decision McCrory and other Republicans made. He should stand by his bigotry and suffer the consequences or admit he was wrong and correct his mistake. McCrory is in no position to negotiate or ask for preconditions. And the people running the North Carolina Restaurant & Lodging Association should aim their frustration solely at the people who made this happen, not the Charlotte leaders whose ordinance would have made the city a more welcome place for LGBT people, boosting all the local businesses along the way.

September 18, 2016
"Psychic" Uri Geller: Donald Trump Will Win the Election Because He Has 11 Letters in His Name
Next Post