Count Steven Tate among those Americans who don’t understand how the First Amendment works. In Arkansas, where the government is in the middle of deciding whether displays by The Satanic Temple and a local atheist group should be allowed to go up next to a Ten Commandments monument, Tate stood outside the Capitol on Thursday with a sign saying “No Baphomet Statue.”

He says if Satanists are allowed to erect that statue, it would “invite the devil“: 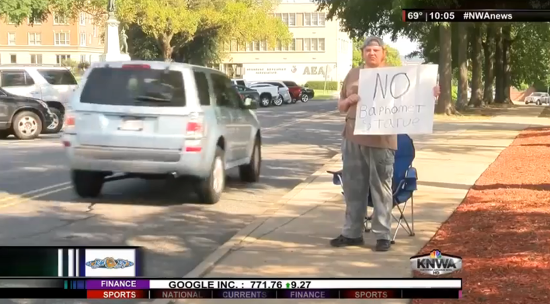 “If they decide they want to just not have any monuments, that would be ok with me.. but we definitely cannot have a statue of Baphomet because that would invite the devil,” protestor Steven Tate said.

There’s no devil and a statue isn’t going to summon one. But if Tate is really concerned, then he should carry a sign reading, “No Ten Commandments,” because Christians wanting that monument near the Capitol is the only reason The Satanic Temple is responding in kind.

September 17, 2016 A Kinder, Gentler Form of Atheism Can Help Fight Religious Extremism, Claim Authors
Browse Our Archives
What Are Your Thoughts?leave a comment