Reader VZ was getting some groceries in Pennsylvania when he saw this gem in the parking lot: 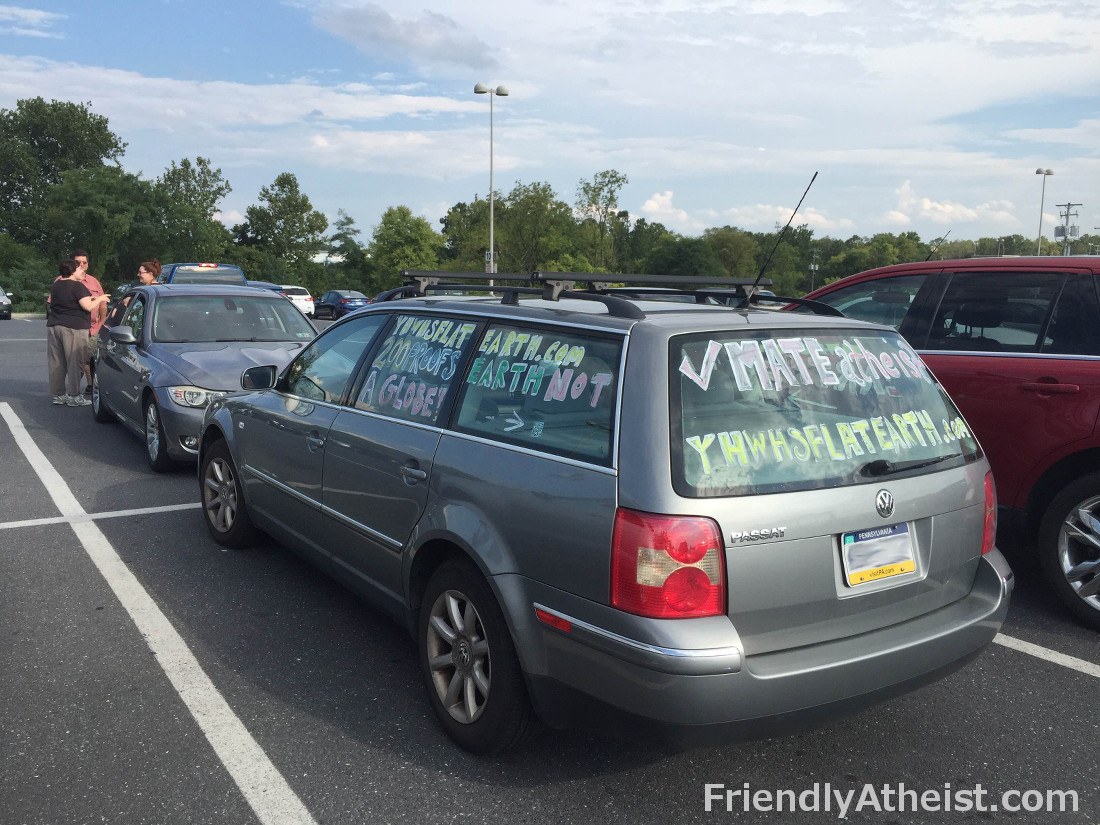 That glorious vehicle says “YHWHsFlatEarth.com” along with “✅MATE atheist.” It also claims that the website has “200 PROOFS EARTH NOT A GLOBE.”

Do you want to check it out? Of course you do. (Be warned: The site is the modern day Time Cube.)

The site redirects to one with the URL “JesusWasNotAJew.org” and includes this statement:

The earth is flat and no matter how you try to argue against it, mathematics, trigonometry and physics proves the globe theory is wrong. We challenge any atheist group in the country or so-called religious believers of the globe theory to prove that the earth is a globe.

Umm… the “globe theory” was proven thousands of years ago.

I thought the site was a joke. But I also said that about Donald Trump. So who knows…

But it was easy to go a step further. The site makes frequent reference to a “Pastor Ernest” and includes his email and phone number. (Domain registration information confirms all that.) If that name sounds familiar, it’s because Ernest Perce V was the former Pennsylvania State Director of American Atheists and anti-Muslim bigot who later converted to Christianity.

I asked him if the site was a joke and he insisted to me in an email that it was very, very real:

The flat earth is evident and many atheists reach out to me daily admitting that the earth is flat after viewing my website. Mathematics and observable science is the proof that we live upon a flat and stationary earth, therefore, there must be a Creator. The Heliocentric model simply cannot be demonstrated, proven or observed.

That’s a small excerpt from a rather long email. I’ll spare you the rest of it. But the point is he’s absolutely into this.

He’s wrong. He doesn’t understand the topic he claims to be an expert about. But that’s how conspiracy theorists work.

September 17, 2016
This Question on a Math Test is Really Homophobic (Also, I Solved It)
Next Post