An Illinois man who has worked for the Social Security Administration for 14 years said he’d rather get fired than watch a short LGBT-inclusive workplace diversity training video. 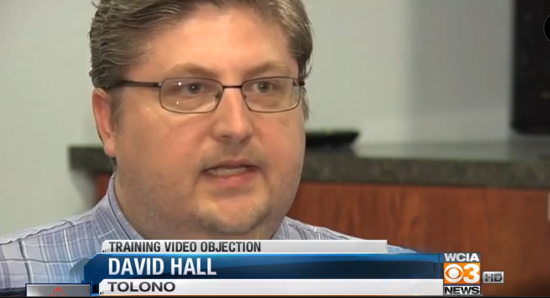 David Hall, who works in information technology in Champaign, Illinois, was suspended for two days without pay for his defiance:

The 42-year-old, who identifies as Christian, said he does not believe God would have wanted him to watch the video. Signing a statement he had watched such a video, moreover, was equal to endorsing “an abomination,” he told WCIA. “I’m not going to certify sin.”

Hall also said the video was propaganda “promoting an agenda and a lifestyle that I simply don’t agree with,” and criticized the agency for requiring employees to watch it. “We have never done that for another particular class of people,” he said. “We haven’t done it for veterans, the disabled, blacks, Hispanics, or anything else.”

Regardless of his opinions on the matter, he faces a longer suspension if he doesn’t comply with the request. Not that he’ll budge. He says he’ll continue to fight this battle to “give other Christians the courage of their convictions.”

So what was in the video?

“This mandatory video training reminds our employees of their responsibility, as representatives of the agency, to provide the highest levels of service to our customers,” [Social Security Administration’s regional communications director Doug] Nguyen went on to say. “The training includes a brief session on tips for increasing cultural awareness in a diverse and inclusive environment. We are unable to comment on specific personnel matters.”

If that sounds completely non-controversial… you’d be right. All the employees were told to do was treat people with respect, a demand that Hall apparently doesn’t want to meet. As a government official, he works for the people, and the Federal government is in the business of making sure employees don’t inadvertently discriminate against the citizens they serve. Given that 3.8% of the nation is LGBT — that’s more than 12 million people — there’s a good chance Hall will be working with some of them. His religious beliefs shouldn’t get in the way of treating them well.

It’s a testament to the great progress we’ve made as a country that our government reminds its employees that it’s against the law to discriminate against others based on gender identity and sexual orientation.

Even without those rules, you’d think the Bible would offer some guidance here. After all, John 13:34 calls on Christians to “love one another.” (Is Hall going to refuse to read his Bible, too?)

Respect for other humans and religious beliefs don’t have to be incongruous.

In Hall’s case, it seems like the mere mention of anything LGBT-related sent him into fits. No one asked him to do anything that defied his Christianity, yet he made this all about how he’s being persecuted. That’s a backwards notion. Some members of society seem to have an obsession with martyrdom. People like Kim Davis and David Hall are entitled, cognitive dissonance champions that refuse to even engage in dialogue.

Americans have played into this idea that they’re somehow heroic for being unwilling to sit and listen to an argument. In fact, it’s cowardice. Hall is denying respect to people who are different from him each time he shuts down and refuses to communicate.

When asked how he knew the video was promoting a “lifestyle” he didn’t agree with, Hall was indignant. The certification was supposed to make him culturally aware… but about what? He already treated people with respect, he claimed, so there was nothing he needed to learn. He even asked, “What am I being [made] aware of?”

September 16, 2016
After a Christian Music Festival Booted a Gay Man from the Lineup, Another Act Brought Him Onstage
Next Post

September 16, 2016 Creationist Ken Ham Just Lowered Attendance Estimates for the First Year of Ark Encounter
Browse Our Archives
What Are Your Thoughts?leave a comment