Maybe the most surprising thing about Colin Kaepernick‘s National Anthem protest — and the subsequent sit-downs by athletes everywhere — is how much of the public has no clue how perfectly appropriate that sort of civil disobedience actually is.

Case in point: Sean Dever, a man from Cape Coral, Florida, who wants the local government to pass an ordinance to ban people from public events if they don’t participate in the Anthem ritual. 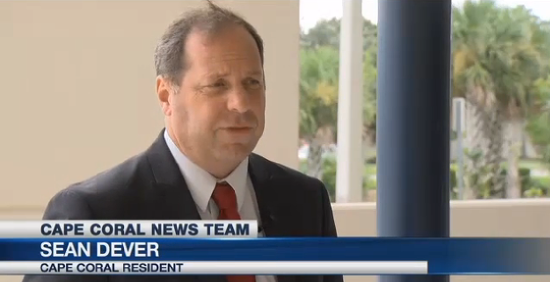 “I don’t know why my taxpayer dollars have to support somebody disrespecting something I served my whole life,” said Dever.

He said those who don’t stand during the anthem at an event on public property should be banned from taking part.

He took his idea to the city council, telling them, “If people wish to use a citizen-supported facility, they should support and respect the country in which they live.”

Dever would one of those ignorant Americans who assumes respect can only be found in acts of forced patriotism. The people who call attention to our country’s flaws in the hopes we’ll find a way to fix the problems? Traitors. Obviously.

At least the city council responded with what I’m sure was a collective eye-roll. They didn’t pass any such ordinance, and the government attorney calmly explained to a local news channel why Dever’s idea was awful.

Would it be legal to ban people?

Attorney Scot Goldberg said it’s a cause for problems and opens a door to discrimination.

“I think then they would be violating a person’s constitutional rights, and I think there would be problems,” he said.

Turns out free speech doesn’t just apply to speech you like… Who knew?!

The guy who claims to love his country has never bothered reading the Constitution, has he?

September 16, 2016
"The Laws of the Church Have No Place on Your Flesh," Declare Irish Women in Powerful New Video
Next Post