According to reports from the Telegraph (UK), counselors from the Alma Pregnancy Advisory Service — a “crisis pregnancy center” that urges women to keep their babies no matter what — were recorded telling clients that abortions cause breast cancer: 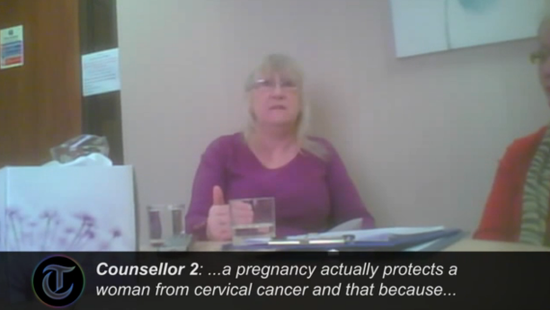 An undercover reporter also visited a CPC in London where she was told that there was “an increased statistical likelihood of child abuse” because women had to break “natural barriers that surround the child that you don’t cross” in order to terminate a pregnancy.

The same adviser also said that women who had terminations were 25 percent less likely to be able to carry a pregnancy to full term.

For the record, the American Cancer Society says that there is no cause-and-effect link between abortion and breast cancer. Rather, the likelihood of a woman developing cancer is related in part to the level of hormones in her body, which could be linked to the number of menstrual periods throughout her lifetime: starting menstruation early and menopause later in life puts a woman at a slightly higher risk for breast cancer, but the reason for this is unknown. Blaming abortion for breast cancer makes as much sense as blaming vaccines for a child’s autism; the evidence just isn’t there.

I don’t doubt that there are plenty of self-identifying pro-lifers out there who genuinely believe that a fetus has personhood. For some, that belief justifies doing anything it takes to stop women from having abortions. But telling women half-baked truths (or blatant lies, in this case) suggests the facts aren’t on your side. What does it say about your beliefs when you have to lie to persuade other people to listen to you? It also doesn’t solve the problem of women who become pregnant due to lack of reliable birth control; they might opt for abortions because they can barely afford the children they already have. The way to solve the abortion problem is to reduce the reasons women seek them in the first place.

It’s also worth pointing out the blatant hypocrisy between this discovery and the edited Planned Parenthood videos discussing the use of fetal tissue. The footage described above is unedited, but David Daleiden confessed that he and several accomplices heavily edited the words of Planned Parenthood director Dr. Deborah Nucatola as she discussed which human tissues are most valuable for research, and conveniently removed the parts in which she said that affiliates would not be making any money from this process; its only purpose was to further research that could, in the future, help patients.

Pro-life extremists will argue that telling these lies is morally permissible if done for a moral good, conveniently ignoring the part in the Ten Commandments that forbids bearing false witness.

September 15, 2016
A California Student Protested the Pledge of Allegiance, So the Teacher Lowered Her Grade
Next Post