A California Student Protested the Pledge of Allegiance, So the Teacher Lowered Her Grade September 15, 2016 Hemant Mehta

A California Student Protested the Pledge of Allegiance, So the Teacher Lowered Her Grade

I don’t know if Leilani Thomas, a freshman at Lower Lake High School in California, is an atheist. But the Native American student has a valid reason for not standing for the Pledge of Allegiance, a ritual she’s protested since second grade: 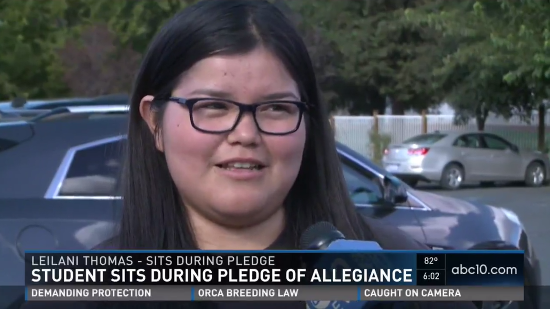 “It’s the reason, because of the history that happened here on my land, my people’s land,” Thomas told the news station in an interview on campus. “I go by that and I don’t agree with it. So I’m not going to stand for the people who did this to my people.”

But guess what happened when she stayed in her seat at the beginning of the school year…?

It got worse. When Leilani received her first report card last week, she saw that her overall grade in that (unnamed) class was lower than it should be. The teacher had taken two points off her participation grade for not standing during the Pledge.

Here’s the beautiful thing: Leilani not only challenged her teacher on it, she recorded the conversation:

“If you really, really have an argument and feel so strongly about, then I need to see it written out,” the teacher said in a conversation Thomas recorded and provided to the station. “Like, why? Why? Because here’s the thing — those people, they’re not alive anymore, your ancestors.”

Thomas and her father took the recording to school officials, who then moved her and her friend to a different class.

And as we all know, the people who think forced patriotism is a brilliant idea never allude to our dead Founding Fathers…

The good news is that Superintendent Donna Becnel seems to understand the law and plans to fix everything:

The district superintendent, upon hearing Thomas’ story, said they would be addressing the issue with the teacher who docked points.

“Students don’t lose their first amendment rights when they walk in the door,” Donna Becnel told KPIX. “We are dealing with the teacher on this.”

Becnel would not say what the teacher’s punishment would be, citing confidentiality. But an apology, at least, would seem appropriate if the teacher simply didn’t know any better.

One more bit of good news: Leilani says many of her classmates support her decision to sit down. She’s not getting harassed in the same way other atheists have been when they’ve protested the Pledge. I hope it stays that way since she has no plans to stand up for the Pledge in the future.