Suspected Rapist Told Authorities the Bible Gave Him the Right to Have Sex with Anyone September 14, 2016 Hemant Mehta

Ian McCann was arrested last week on charges of rape and attempted rape. But on Saturday, in a devastating turn, a judge had to let him go free “because the Bernalillo County Sheriff’s deputy who arrested him didn’t sign the court documents.”

It wasn’t until Sunday when a new warrant for his arrest could be issued. The problem is that McCann was nowhere to be found. The assault in question took place at a homeless shelter and McCann was clearly looking to get the hell out of town.

Reporter Danielle Todesco and her camera operator Dennis Quintana of KOB 4 News were covering the story over the weekend when, incredibly, they saw McCann walking on the street. They followed him from a distance, letting the police know of his whereabouts, until cops could get to the scene and arrest him. 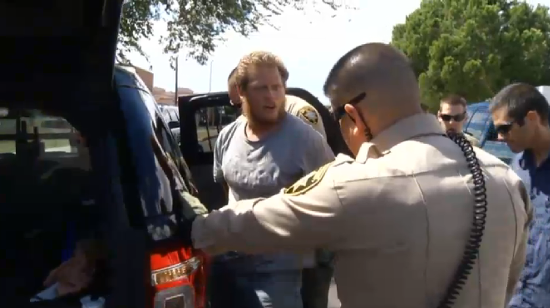 That’s the version of the story making headlines.

What’s really messed up and shouldn’t be forgotten in this bizarre story is the explanation Ian McCann gave the first time he got arrested for why he committed his crime:

Mccann later told investigators he believed the Bible gave him the right to have sex with whoever he wanted, whenever he wanted…

At least they arrested him before the love of Christ hurt another victim.

***Update*** (9/27): A source tells me McCann suffered from schizophrenia, so mental illness may have played a large role in this story. I haven’t been able to confirm that, though.

(Screenshot via Global News. Thanks to Denise for the link)

September 14, 2016 Republican Rep. Steve King: LGBT Parenting Studies Are a Hoax, Just Like Global Warming
Browse Our Archives
What Are Your Thoughts?leave a comment