Study: Religion Contributes At Least $378 Billion a Year to the U.S. Economy

A new study published in the Interdisciplinary Journal of Research on Religion estimates that religion as a whole contributes more than $378 billion a year to our economy. That includes money given to churches, paid to Catholic hospitals, donated to religious charities, made by companies that prepare food for believers with specific faith-based dietary restrictions, etc.

That amount is “more than the global annual revenues of tech giants Apple and Microsoft combined,” and this estimate is on the low end. A more generous look at the data puts religion-generated revenue at $4.8 trillion (a third of the country’s GDP). 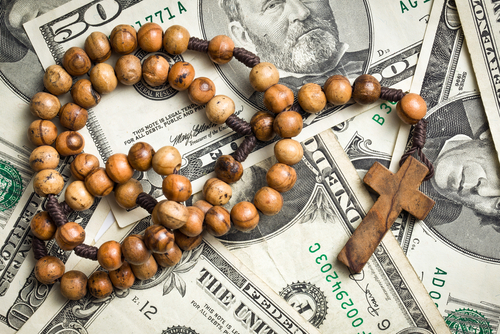 The study was sponsored by Faith Counts, a pro-religion organization, and their aim is to celebrate and promote religion:

“For the first time, we have been able to quantify what religious institutions, faith-based charities, and even businesses inspired by faith contribute to our country,” said Dr. [Brian] Grim. He continued: “In an age where there’s a growing belief that religion is not a positive for American society, adding up the numbers is a tangible reminder of the impact of religion. Every single day individuals and organizations of faith quietly serve their communities as part of religious congregations, faith-based charities, and businesses inspired by religion.

The study fails to take into account things like therapy costs for people harmed by religious beliefs… though, technically, the researchers could also argue that those costs are part of religion’s impact on society. They address this briefly in the paper, but don’t include these factors in their calculations:

… not every religious organization or group has the same level of impact, and not all of the impact is positive. Indeed, there are high profile cases where people in religious authority or acting in the name of religion have engaged in destructive activities. These negative impacts range from such things as the abuse of children by some clergy…, cases of fraud…, and places of worship becoming recruitment sites for violent extremism…, all of which detract from the other positive values of religious institutions.

Of course, such serious ills affect a wide variety of institutions ranging from major public universities…, to publicly traded companies…, to online public chatrooms… And, while negative news makes news, both sides are important to understand clearly.

That’s the biggest flaw here: Just because religion drives a lot of spending in our country, it doesn’t mean we’re better off because of it. We know the harm that Catholic hospitals inflict upon many women. We know the psychological damage caused by priests who teach that disobedience to God could lead to an eternity of torture. We know that faith-based charities often discriminate against workers who are openly gay.

What would happen if money given to Christian groups promoting ineffective abstinence-only sex education was instead given to secular groups promoting comprehensive sex ed? Could you argue that’s better for our economy in the long run?

What if we stopped promoting anti-science religious groups and used that money to inspire future scientists who could create new avenues for wealth?

Just because you buy a religious book, or give to a religious charity, or tithe at church doesn’t mean you’re helping anyone. So when the researchers wonder “if the decline in religion is likely to have negative economic consequences,” the answer might be yes, but we can also make up for that in other, better ways.

That’s why this conclusion leaves so much to be desired:

Religion provides purpose-driven institutional and economic contributions to health, education, social cohesion, social services, media, food and business itself. Perhaps most significantly, religion helps set Americans free to do good by harnessing the power of millions of volunteers from nearly 345,000 diverse congregations present in every corner of the country’s urban and rural landscape.

That’s a conclusion you could reach only by conveniently ignoring the devastation that religion also causes.

I would love to see future studies take that into account. What a fascinating paper it would be that addresses how much money is wasted or lost because of religion belief.

September 14, 2016 A Jehovah's Witness Watchdog is Writing a Book About the Religion and His Own Apostasy
"My wife never smoked cigarettes but she still loves candy cigarettes."
LenKoz TN Health Official: GOP Governor’s Christianity ..."
"Ah, fie! 'Tis an unweeded garden that grows to seed;Things rank and gross in nature ..."
Wizard Suth “Psychic Medium” Thomas John Fell for ..."
"Yes. But Linux doesn't require a Microsoft account to install, so they can track your ..."
cdbunch Rick Wiles: People Vaccinated with “Satanic ..."
"In Canada the CRTC makes such a distinction, which is why Fox News can't promote ..."
Wizard Suth “Psychic Medium” Thomas John Fell for ..."
Browse Our Archives
What Are Your Thoughts?leave a comment