Yesterday, after Donald Trump announced his new childcare proposals, many policy wonks were quick to note that the plan excludes many families and can’t be paid for. But CNN’s Chris Cuomo brought up another fair question to Trump surrogate Rep. Steve King (R-IA): Would the plan cover families with two gay parents?

King didn’t answer that. Instead, he talked about why “natural” families need to be promoted, a silly statement that Cuomo immediately rebutted: 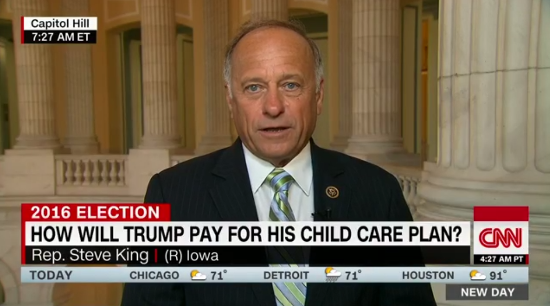 .@SteveKingIA on whether Trump's child care plan will protect LGBT families: "I want to promote the natural family" https://t.co/IvyUHZ0x83

“I want to respect all people but I want to promote the natural family, Chris, and I think that’s the most wholesome thing that we can do,” he said on CNN’s “New Day.”

“The natural family is a man and woman joined together hopefully in holy matrimony blessed by God with children,” the Donald Trump supporter added.

Cuomo cited scientific research that says children of same sex parents do as well if not better than the children of heterosexual families.

“Why not encourage anything that gets a child loved and provided for?” he asked the Congressman.

King said he needed to “look a little further” into that research — how’s that for an understatement? — before bizarrely suggesting that the research could be wrong, because when we explored climate change, we “found out there was another side to that equation, too.” (That’s a lie.)

Maybe reporters can ask Mike Pence whether LGBT families would be covered in a Trump administration. Let’s all watch him squirm. After all, Trump keeps telling us he’s a friend to the gay community, but he’s doing everything he can to pander to a conservative Christian voter base.

September 14, 2016
Suspected Rapist Told Authorities the Bible Gave Him the Right to Have Sex with Anyone
Next Post