Last month, the Secular Coalition for American released their scorecard on the major party presidential candidates. Hillary Clinton earned an “A” on their church/state separation issues, while Donald Trump failed miserably.

Now it’s the third party candidates’ turn. The SCA looked at the positions of the Libertarian Party’s Gary Johnson and the Green Party’s Dr. Jill Stein and gave them grades of “B” and “A,” respectively. 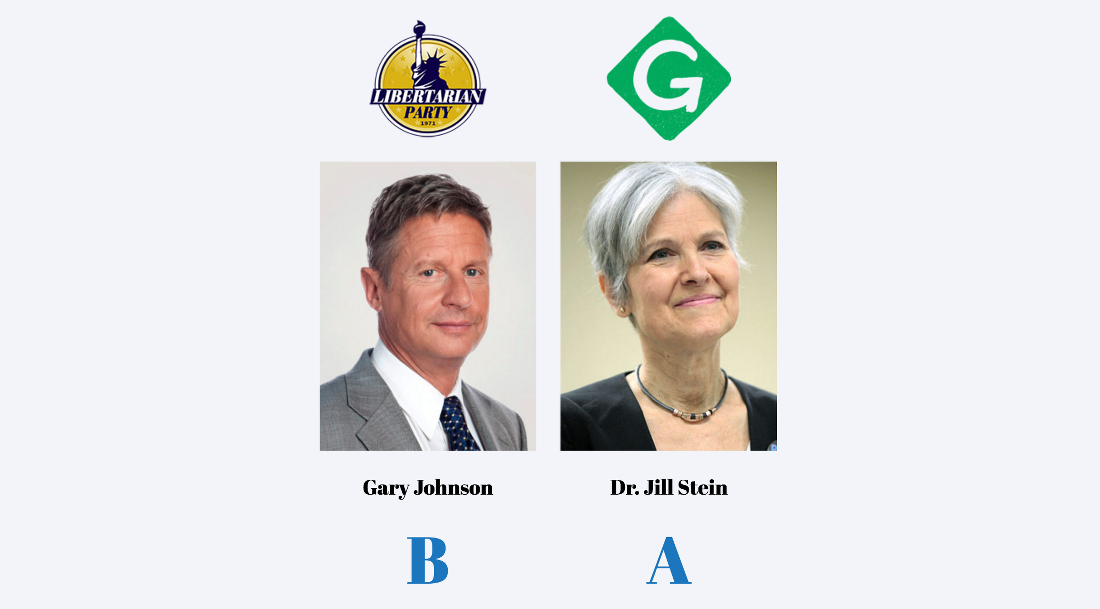 In July both Jill Stein and Gary Johnson embraced an inclusive message toward atheist voters on social media following a question from David Silverman, President of American Atheists, a member organization of the Secular Coalition for America.

“Nontheistic Americans have a long and proud history of being freethinkers, not content to accept the status quo,” Decker said. “Given this tendency, along with the fact that more than one-quarter of nonreligious voters are independent, it seems obvious that outreach to secular voters should be a central part of any third party’s strategy.”

Johnson actually got failing subscores in two categories. When it comes to comprehensive sex education in public schools, he said it’s a decision best left to the states, even if they reject it in favor of an abstinence-only curriculum.

What about religious groups that receive taxpayer money to provide social services: Should they be allowed to discriminate while using federal money? Johnson argued in favor of vouchers, even if that meant sending kids to religious schools. (That’s a horrible idea and doesn’t actually answer the question…)

What about Stein? She got As on all the questions where her stances were clear… and there was no on-the-record information about her positions on the other issues.

Some of you may be wondering why Stein, who has been rightfully criticized for questioning vaccines and raising other conspiracy theories, received a top grade from the Secular Coalition for America.

The short answer is that the issues they raised were selected in advance, and Stein’s responses to those questions were acceptable to the SCA. They didn’t ask about GMOs or vaccine efficacy. If they did, I’m sure Stein’s grade would have been much lower.

But that’s the downside of these report cards; they don’t grade candidates on everything, even if those topics may be important. They only judge them on a handful of issues.

September 14, 2016
The Satanic Temple's New Building In Salem, MA Is Right By a Fundamental Baptist Church
Next Post

September 14, 2016 Study: Religion Contributes At Least $378 Billion a Year to the U.S. Economy
"I think that kind of stereotyping is unfair to those in southern states that fight ..."
Dismisaidon NC Lawmakers, Noting Their Own Hypocrisy, ..."
"https://uploads.disquscdn.c..."
Synfandel Evangelist Robin Bullock: Jesus Visited Me ..."
"But I know the throne rooms I’ve been to. And I never asked to go!Constipated?"
wreck Evangelist Robin Bullock: Jesus Visited Me ..."
"It makes them so very, very special, doesn’t it?"
BensNewLogin Creationist Kent Hovind “Bodyslammed” Me, Says ..."
Browse Our Archives
What Are Your Thoughts?leave a comment