A Jehovah’s Witness Watchdog is Writing a Book About the Religion and His Own Apostasy September 14, 2016 Hemant Mehta

If I post a lot about the Jehovah’s Witnesses on this site, it’s because I learned only in the past few years just how seriously messed up that religion is. Between their actual wacky beliefs and their practice of shunning those who leave the faith, I’m amazed that this all went under my radar for so long.

Lloyd Evans is the person who brought all this information to my attention. He’s done a masterful job at JWSurvey.org of documenting shady JW practices, informing us of what the Watchtower Society is telling believers, and sharing his own experiences within the faith.

And now he’s writing a book all about it. It’s called The Reluctant Apostate, it’s coming out early next year, and he’s raising money to cover the costs of publishing it: 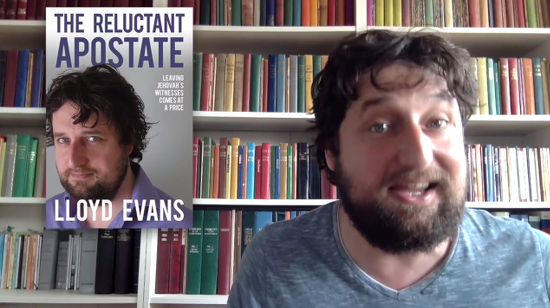 I would strongly encourage you to make a contribution that gives you an advance copy of the book. (If it’s any added incentive, I’ll have the honor of writing the foreword.)

We often talk on this site about the harm religion causes, but rarely are the consequences as devastating as they are for those who leave the Witnesses. Lloyd experienced that personally, and he’s spent the past several years helping people who had nowhere else to turn. This is the first time his story will be published in full.

I hope it lets other Witnesses know that there is hope if they leave, no matter what the Watchtower Society tells them.

September 14, 2016
Study: Religion Contributes At Least $378 Billion a Year to the U.S. Economy
Next Post

September 15, 2016 This Remix of a Prosperity Gospel Preacher's Greatest Hits Is Really Disturbing
"“Love” should be in quotation marks, because it’s anything but “love”"
CriticalDragon1177 Angry Christian Mom: The “Blue’s Clues” ..."
"Normally not a fan of resorting to violence, but I would consider taking nudes without ..."
GT Klingenschmitt: Biden is Letting the Antichrist ..."
"Not fair! Portland and Seattle were completely destroyed by Antifa Army Regulars during the Trump ..."
Alvin "Creepy" Karpis Klingenschmitt: Biden is Letting the Antichrist ..."
""Under God" was added by people who specifically said it was the christian god and ..."
alverant Newsmax Panel Flips Out After Student ..."
Browse Our Archives
What Are Your Thoughts?leave a comment