Camden (NJ) Diocese: Student Athletes Who Don’t Stand for the Anthem Will Be Suspended… or Worse September 13, 2016 Hemant Mehta

Camden (NJ) Diocese: Student Athletes Who Don’t Stand for the Anthem Will Be Suspended… or Worse

If there’s one thing we’ve learned since Colin Kaepernick refused to stand for the National Anthem (and others followed suit), it’s that some critics are more offended by people not participating in the pseudo-patriotic ritual than by the problems that led to those protests in the first place. 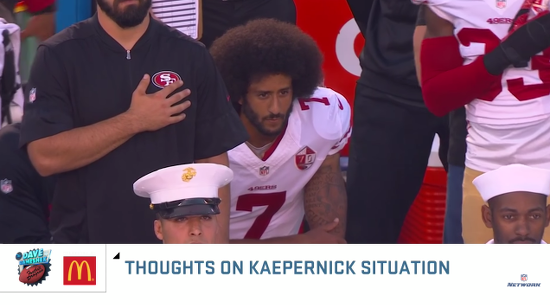 At least the NFL’s Roger Goodell, President Obama, and other influential leaders are on the side of free speech, even if it’s a form of protest they personally oppose.

That’s not the case in New Jersey, where the Camden Diocese sent an email to all the Catholic high schools in their jurisdiction announcing that students who protest the National Anthem will be suspended (or worse).

“In light of the recent controversy regarding the NFL player’s refusal to stand for the National Anthem, I seek to clarify the position of the Office of Catholic Schools,” Boyle wrote. “… Our schools are founded on the teaching of respect and honor; respect and honor for God, country and duly appointed authority.

“It is expected that our administration and coaches as well as our athletes will show respect during prayer, pledges and the playing or singing of the National Anthem. … We are not public institutions and free speech in all of its demonstrations, including protests is not a guaranteed right. Failure to demonstrate appropriate respect will result in suspension from play (2 games) or dismissal from the team for subsequent offenses.“

That’s a weird statement, isn’t it? We’re not a public school, so we don’t give a damn about your rights. Whether they have a legal opening to restrict students’ First Amendment rights is still being debated. It’s possible even religious schools can’t go this far.

But beyond the legal arguments, it’s telling that the Catholic Church, of all places, would put more weight on forced displays of piety than what people are actually thinking. They don’t care if students have personal reasons for opposing how our country treats minorities… as long as they pretend to honor the country. Just like they don’t care if you oppose Catholic doctrine on LGBT rights, the ordination of women, and reproductive freedom as long as you shut up, open your mouth, and accept the communion wafer.

This is a Diocese that wants to send a message to children: Forced “patriotism” is the best kind of patriotism. Those who seek to improve the country by calling attention to its faults are traitors.

Look at how a local public school district addressed the same situation:

Saturday evening, the Camden City School District stood behind the Tigers’ gesture as a form of free speech.

The district released a statement through spokesperson Brendan Lowe.

“The District supports standing for the flag, but this is a personal issue, and we strongly respect our students’ experiences and their exercising our country’s First Amendment rights,” it read. “Whether our students choose to stand, kneel, or otherwise, we’re proud of their engagement with what is more broadly a very important social justice issue.”

Which school system is offering a better outside-the-classroom education? There’s no contest here.

Though, as one commenter on the Courier-Post‘s website points out, it’s a nice change of pace to hear Catholic priests telling kids not to kneel.

September 13, 2016
The NCAA Is Moving Championship Games Out of North Carolina, and the GOP Isn't Taking It Well
Next Post