Tony Perkins has spent his career fighting against marriage equality, defending bills that call for the execution of gay people, saying there’s a connection between homosexuality and pedophilia, and arguing that a repeal of “Don’t Ask, Don’t Tell” would lead to bloodshed.

He’s also called LGBT rights supporters “intolerant,” “hateful,” “vile,” and “spiteful.” (And that was all in the same sentence.)

But Hillary Clinton called racists, sexists, and xenophobes “deplorable”… so Perkins is in shock by how mean she is. He displayed his faux-apoplexy on Fox Business Network this morning with host Stuart Varney (who didn’t bother challenging him on his hypocrisy). 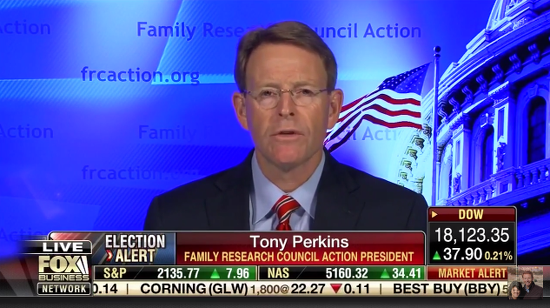 PERKINS: … [Clinton’s comment] shows how narrow-minded, isolated the liberal, progressive wing of the Democratic Party have become, where they feel like they can insult anyone, silence anyone who does not agree with their progressive agenda.

VARNEY: I’ve got real problems when people call names at ordinary, decent Americans. I don’t like it.

What Clinton said wasn’t smart… but it wasn’t wrong, either. And it’s important to note she didn’t say any punishments should be heaped upon those she condemned. Meanwhile, Perkins wants to make sure two people in love can’t get married or even adopt children.

I’ll take name-calling over bigotry in action any day.

And take special note of Varney’s last line there. As he spoke out against name-calling, Perkins remained stoic except for a small nod in agreement, as if he’s never said anything genuinely awful about anyone in his life.

The man who leads a hate group can’t handle well-deserved criticism and acts like he’s done no wrong.

September 12, 2016 A Decade After Atheists Were Found to be the Most Disliked Group in the Country, Little Has Changed
"As a Texan, I curse you to an eternity of pineapple pizza with white sauce ..."
cdbunch GOP Senator to Biden Department of ..."
"😈"
Zorginipsoundsor GOP Senator to Biden Department of ..."
"Dunno, but things like do not fill me with hope for the future of our ..."
ORAXX When a Muslim Woman Was Harassed ..."
"https://i0.wp.com/braindead..."
WallofSleep When a Muslim Woman Was Harassed ..."
Browse Our Archives
What Are Your Thoughts?leave a comment